The anti-Romeo squad in Auraiya issued warning against miscreants whose activities seemed suspicious. The residents in crowded places were also advised to wear masks, maintain social distancing and use sanitisers in view of the pandemic. 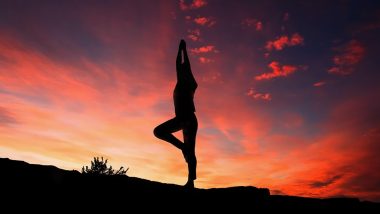 Lucknow, December 24: Improving women’s health strengthens their economic empowerment. Taking a cue, the UP Government departments have been organising majority of the activities with focus on women’s health under the Mission Shakti campaign.

Anganwadi workers in Amethi raised awareness among expecting mothers about intake of nutritional food and taking care of themselves and their kids to stay healthy and nourished. Several awareness events were also organised at anganwadi centres regarding child rights, forced begging, child trafficking, domestic violence and crime against women. Mission Shakti: Women Panchayat Representatives Get a Lesson in Governance.

In Bareilly, the students of Islamia Girls Inter College and Ram Bharose Inter College were trained in Yoga. An expert yoga practitioner gave presentation to the students on stage and also motivated them to lead a healthy life. A karate camp was also organised in Ram Bharose College with an objective to train girls in self defence. A voluntary organisation held awareness events at Bhojipura and Meerganj blocks, and Kushthashram Prem Nagar.

In Kannauj, the anti-Romeo squad interacted with women and girls and gave them details about the women helpline numbers. LED vans and nukkad nataks were presented for spreading information about the Mission Shakti campaign in Sitapur.

The anti-Romeo squad in Auraiya issued warning against miscreants whose activities seemed suspicious. The residents in crowded places were also advised to wear masks, maintain social distancing and use sanitisers in view of the pandemic.

The Balrampur women learnt some tips on hygiene in an event organised by chief medical officer where they were told about health, hygiene and nutrition. Around 500 people attended the event. The labour department here organised a registration camp which was held for the welfare of women labourers. Uttar Pradesh CM Yogi Adityanath’s Emphasis on Digital Awareness Is Reaping Fruits, Online OPD Service ‘E-Sanjivani’ a Hit Among People.

Meanwhile, the social welfare department held awareness camp of Tharu women and informed them about the activities such as old age pension, Rashtriya Parivarik Labh, allowance for marriage etc.

The Panchayati Raj Department which has been instrumental in promoting better sanitation system in rural areas and hence health and hygiene, once again handed over the responsibility of the upkeep of a public toilet in Kabirpur gram panchayat in block Gosainganj of the state capital to a women self-help group. The Bal Vikas Sewa Evam Pustahar department reached out to women and children to spread awareness about the objectives of the campaign.

To mention, the Mission Shakti campaign was launched in Uttar Pradesh on October 17 by Chief Minister Yogi Adityanath and it will continue till April 2021.