In all the five accident cases, victims lost balance and fell when their two-wheelers hit a pothole. According to reports, in the Navi Mumbai mishap, the victim was identified as Sunny Vishwakarma, 27, a resident of Ulwe. 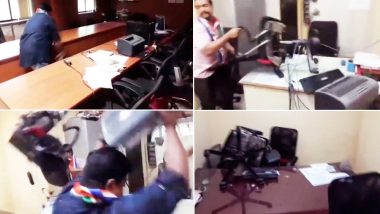 Mumbai, July 16: In the wake of the rising number of pothole-related deaths in the city,  Maharashtra Navnirman Sena (MNS) workers on Monday vandalised the Public Works Department of India (PWD) office in Navi Mumbai. In the last two weeks, pothole-ridden roads have claimed a total of five lives - four in Kalyan, while one in Navi Mumbai.

In all these cases, victims lost balance and fell when their two-wheelers hit a pothole. According to reports, in the Navi Mumbai mishap, the victim was identified as Sunny Vishwakarma, 27, a resident of Ulwe.

The incident took place in Sanpada on the Sion-Panvel Highway and the police have registered a case of accidental death. The accident took place while Vishwakarma was on his way home and failed to spot a pothole that was covered in water.

On Saturday, Maharashtra PWD minister Chandrakant Patil sparked a row by saying that pothole-ridden roads cannot be blamed for accidents alone. Speaking to reporters in Sangli yesterday, Patil said, "When you talk about a death in such an accident, you forget that five lakh other people have travelled on the same road. You can not put the entire blame on the (condition of) roads alone." However, on Monday, the PWD minister clarified saying, "I did not mean to hurt anyone's sentiments, I had made a general statement".

Mumbai Congress chief Sanjay Nirupam claimed today that there were 20,000 potholes on Mumbai roads, and not 300 as stated by the civic body BMC before the Bombay High Court.

(The above story first appeared on LatestLY on Jul 16, 2018 12:42 PM IST. For more news and updates on politics, world, sports, entertainment and lifestyle, log on to our website latestly.com).