The Mumbai Police have arrested a 27-year-old man who allegedly flashed his private parts at two women near Vidyavihar railway station. 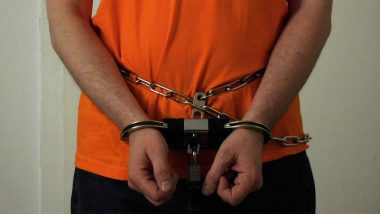 Mumbai, October 11: The Mumbai Police have arrested a 27-year-old man who allegedly flashed his private parts at two women near Vidyavihar railway station. The accused was identified as Bittu Palsingh Parcha, a sweeper by profession. The two women lodged a complaint against Bittu Palsingh Parcha at the Tilak Nagar police station after which cops arrested him. The incident took place on October 10. Mumbai: Man Flashes Private Parts to a Girl at ATM, Arrested With The Help of Her Video.

Bittu Palsingh Parcha was seated in a car near Vidyavihar railway station. Around 2:30 pm, he called the two women on the pretext of asking for an address. When the women came close to the car, he suddenly flashed at them, police told The Indian Express. The women then came to the Tilak Nagar police station and submitted a complaint against the accused. Aurangabad: Unknown Caller Makes Video Call to Woman For Sexual Favours, Flashes Private Parts at Her.

The two women had noted the registration number of the vehicle in which Parcha was sitting. Cops swung into action and tracked the accused near Natraj bar. He was taken into custody. A case under sections 354 (A) (1) (sexual harassment), 509 (word, gesture or act intended to insult the modesty of a woman) and 336 (act endangering life or personal safety of others) of the Indian Penal Code, has been registered against Parcha.

(The above story first appeared on LatestLY on Oct 11, 2020 05:42 PM IST. For more news and updates on politics, world, sports, entertainment and lifestyle, log on to our website latestly.com).