The Mumbai Police have arrested a young man whose video doing a dangerous stunt on the narrow ledge of a high-rise building went viral recently. 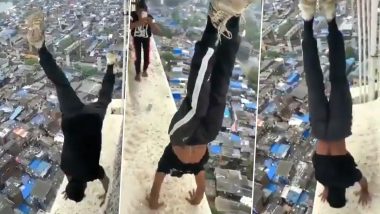 Mumbai, October 16: The Mumbai Police have arrested a young man whose video doing a dangerous stunt on the narrow ledge of a high-rise building went viral recently. The accused has been identified as Noman D'Souza. The video of D'Souza doing a handstand on the ledge of the building, was widely circulated on social media after which police had registered a case against him and two of his accomplices who recorded the clip.

In the video, D'Souza was seen sipping an energy drink. He was sitting on the boundary wall of the 22nd floor of a building. He then jumps on to the ledge, which appears to be barely two feet in width, and performs handstand. His friends record the stunt and the video of which went viral. The video was reportedly made on October 11. Police had launched a manhunt after identifying the building. Bikers in Delhi Caught Performing Daring Stunts on Road Near Vikas Marg; Watch Video.

According to reports, D'Souza had in past made videos of him doing dangerous stunts and uploaded them on social media. Hundreds of people lose their lives or injure themselves while trying to perform and record dangerous stunts. For them, it is an easy way to draw attention and get instant fame.

(The above story first appeared on LatestLY on Oct 16, 2020 08:15 PM IST. For more news and updates on politics, world, sports, entertainment and lifestyle, log on to our website latestly.com).