Mumbai Woman Gets Duped to Tune of Rs 1.32 Lakh After Taking Part in KBC Lottery Fraud

In her complaint, the woman claimed that as per the message her mobile number was selected for a lottery prize of Rs 25 lakh. 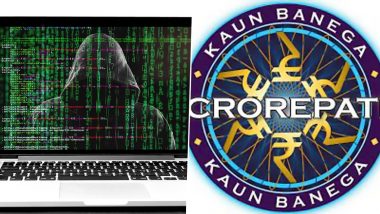 Mumbai, March 27: In yet another case of cheating and online fraud, a 56-year-old woman from Grant Road fell prey to the Kaun Banega Crorepati (KBC) lottery fraud after she lost Rs 1.32 lakh. The alleged incident came to light after the woman filed a First Information Report on March 25 with the DB Marg Police station.

According to a report in the Indian Express, on March 23, the woman received a WhatsApp message from online fraudsters who claimed to be part of the Kaun Banega Crorepati TV show which is hosted by actor Amitabh Bachchan. Russia-Ukraine War: 12 Journalists Killed in Ukraine Since Beginning of War, Says Ukrainian Prosecutor General Iryna Venediktova.

In her complaint, the woman claimed that as per the message her mobile number was selected for a lottery prize of Rs 25 lakh. The message also had the contact information of a person who would help the victim to claim the reward.

Following this, the woman sent a message on the number and a day later, she was asked to share her personal details. Police officials said that after the woman shared her details, the scammer asked to fill a Know Your Customer (KYC) form for KBC.

"The fraudster said that I would have to pay Rs 8,000 as fees for the submission of the form. Then, citing various reasons, they made me pay Rs 1.32 lakh to claim the prize money. After paying the money, the fraudster asked me to pay another Rs 1.82 lakh. This is when I realized that I was being cheated," the woman stated in her FIR.

(The above story first appeared on LatestLY on Mar 27, 2022 11:50 AM IST. For more news and updates on politics, world, sports, entertainment and lifestyle, log on to our website latestly.com).