The Prime Minister said in areas where daughters were not even allowed earlier, daughters are doing wonders in them today. This is the new India, which does not hold back from innovating, courage and determination are the hallmarks of India today. 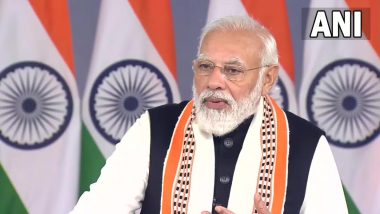 January 24: 29 Children have been conferred the Pradhan Mantri Rashtriya Bal Puraskar this Year, selected from all regions of the country for their exceptional achievements in Innovation (7), Social Service (4), Scholastic (1), Sports (8), Art & Culture (6) and Bravery (3) categories.  There are 15 Boys and 14 Girls among the awardees belonging to 21 States and UTs.

In view of the unprecedented circumstances emerging due to COVID-19 situation in the country, it was not possible to organise a physical ceremony at New Delhi. In order to felicitate and motivate the exceptional works of children, a function was held virtually on the occasion of National Girl Child Day today and also as part of Azadi Ka Amrit Mahotsav. The Awardees of PMRBP 2021 and 2022 along with their parents and concerned District Magistrate of their respective district joined the event from their district Head Quarters.

The cash prize of Rs.1,00,000/- was given to the awardees of PMRBP 2022 which was transferred online to the respective accounts of winners during the programme by the Hon’ble PM. National Girl Child Day 2022 Quotes: Warm Wishes, WhatsApp Messages & Empowering Quotes For Female to Promote Awareness About Rights of Young Girls.

The Hon’ble Prime Minister interacted virtually with the winners of PMRBP 2022. Union Women and Child Development Minister Smt Smriti Zubin Irani and Dr. Munjpara Mahendrabhai, Minister of State were among those present on the occasion.

Interacting with Master Avi Sharma of Indore, Madhya Pradesh the Prime Minister enquired about the secret of his prolific output with regard to various aspects of Ramayana. Master Avi Sharma said that he got the inspiration by the decision of broadcasting the serial Ramayana during the lockdown. Avi also recited some couplets from his creation. The Prime Minister narrated an incident when he went and heard Sushri Uma Bharti Ji when, as a child, she showed immense spiritual depth and knowledge in a programme. He said there is something in the soil of Madhya Pradesh that gives rise to such precocious talent. The Prime Minister told Avi that he is an inspiration and an example of the adage that you are never too young to do big things.

Interacting with Kumari Remona Evette Pereira from Karnataka, the Prime Minister discussed her passion for Indian Dance. He inquired about the difficulties she faced in pursuing her passion. The Prime Minister complimented her mother for ignoring her own adversities to realise her daughter’s dreams. The Prime Minister said that Remona’s achievements are much bigger than her age and told her that her art is a way of expressing the strength of the great country.

Interacting with Master Meedhansh Kumar Gupta from Punjab, the Prime Minister enquired about his achievement of creating an app for COVID issues. The Prime Minister said that in children like Meedhansh he feels that the government efforts to promote entrepreneurship are bearing fruit and a tendency to become job providers instead of being job seekers is becoming more pronounced.

Addressing the gathering, the Prime Minister noted that these awards become all the more significant in the light of the fact that they have been conferred during the important period when the country is celebrating Azadi Ka Amrit Mahotsav. He said this is the time to draw energy from the past and dedicate oneself to achieving great results in the coming 25 years of the Amrit kaal. He also greeted the daughters of the country on National Girl Child Day. The Prime Minister remembered the glorious history of the Freedom Struggle and the contribution of Birbala Kanaklata Barua, Khudiram Bose and Rani Gaidinilu. “These fighters had made the country's freedom the mission of their lives at a very young age and had dedicated themselves for it” the Prime Minister noted.

The Prime Minister also recalled his visit to the Nowshera sector of Jammu and Kashmir on Diwali last year where he met Baldev Singh and Basant Singh who had played the role of child soldiers in the post-independence war. They Helped his army at such a young age without caring about their life. The Prime Minister paid tribute to the bravery of these heroes.

The Prime Minister said that in any sector, policies and initiatives are keeping youth at the centre. He cited initiatives like Start Up India, Stand Up India, Digital India, Make in India along with Jan Andolan of Aatmnirbhar India and creation of modern infrastructure. This, he said, is in sync with the speed of the youth of India who are leading this new epoch both in India and outside. The Prime Minister underlined the growing prowess of India in the innovation and start-up sphere. He conveyed the nation's pride in the fact of major global companies being led by Indian young CEOs. “Today we feel proud when we see the youth of India excelling in the world of startups. Today we feel proud when we see that the youth of India are innovating, taking the country forward”, the Prime Minister said.

The Prime Minister said in areas where daughters were not even allowed earlier, daughters are doing wonders in them today. This is the new India, which does not hold back from innovating, courage and determination are the hallmarks of India today.

The Prime Minister lauded that the children of India have shown their modern and scientific thinking in the vaccination program as well. Since January 3, in just 20 days, more than 40 million children have got the corona vaccine. He also lauded them for their leadership in the Swachch Bharat Abhiyan. The Prime Minister appealed to them to be an ambassador for Vocal for Local and lead the campaign of Aatmnirbhar Bharat. National Girl Child Day 2022 Images & HD Wallpapers for Free Download Online: Wish Happy Girl Child Day With WhatsApp Messages, Facebook Quotes and Status on Rashtriya Balika Diwas.

(The above story first appeared on LatestLY on Jan 24, 2022 04:06 PM IST. For more news and updates on politics, world, sports, entertainment and lifestyle, log on to our website latestly.com).