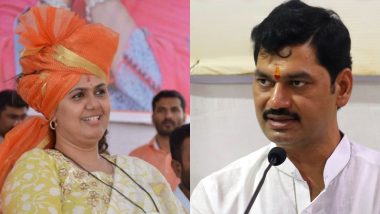 According to several media reports, Pankaja Munde dialed the Maharashtra Minister and told him to 'take care and get well soon'. It is to be known that Dhananjay Munde is the estranged cousin of Pankaja Munde. Earlier, Dhananjay won the Parli Assembly seat against Pankaja in 2019 Maharashtra Assembly elections. The NCP leader had secured 1.22 lakh votes as against 91,413 votes bagged by Pankaja Munde. Maharashtra Crosses 1 Lakh COVID-19 Cases With 3,493 New Infections, Death Toll 3,717.

Earlier, Public Health Minister Rajesh Tope informed the media that state's Social Justice Minister Dhananjay Munde has tested positive for coronavirus but he is asymptomatic and his condition is stable. Tope had said, "It is true he (Munde) has tested positive. He is stable. He is asymptomatic, but there is a minor problem of breathlessness." Adding more, he said, "We are admitting him to Breach Candy Hospital (in South Mumbai). He is a fighter. He will be active in eight to ten days."

Apart from Munde, the minister’s private secretary, his media advisor and three other employees in his office have also tested positive but are asymptomatic. Dhananjay Munde is the third minister in Maharashtra to contract the virus. Prior to him, NCP's Jitendra Awhad and Congress' Ashok Chavan were tested positive with coronavirus. However both recovered from the infection.

(The above story first appeared on LatestLY on Jun 13, 2020 09:09 AM IST. For more news and updates on politics, world, sports, entertainment and lifestyle, log on to our website latestly.com).