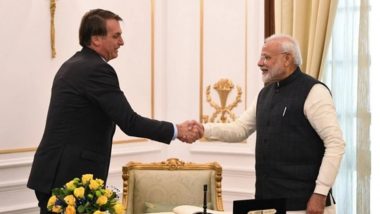 New Delhi, February 28: Prime Minister Narendra Modi on Sunday congratulated Jair Bolsonaro, the President of Brazil, on the successful launch of Brazil's Amazonia-1 satellite by ISRO's PSLV-C51. Taking to Twitter, the Prime Minister termed the successful launch of PSLV-C51 as a 'historic moment'. "This is a historic moment in our space cooperation and my felicitations to the scientists of Brazil," the Prime Minister tweeted. PSLV-C51 rocket, which is the 53rd mission of PSLV (Polar Satellite Launch Vehicle), launched Amazonia-1 of Brazil as primary satellite and 18 co-passenger satellites from Sriharikota.

Amazonia-1 is the optical earth observation satellite of the National Institute for Space Research (INPE). The countdown for the launch of Amazonia-1 mission commenced on Saturday. PSLV-C51/Amazonia-1 is the first dedicated commercial mission of NewSpace India Limited (NSIL), ISRO''s commercial arm. The 18 co-passenger satellites are -- four from the Indian National Space Promotion and Authorisation Centre (three UNITYsats from the consortium of three Indian academic institutes and one Satish Dhawan Sat from Space Kidz India) and 14 from NSIL.

Congratulations President @jairbolsonaro on the successful launch of Brazil's Amazonia-1 satellite by PSLV-C51. This is a historic moment in our space cooperation and my felicitations to the scientists of Brazil. @isro

On Sunday, polar rocket PSLV C-51 carrying Amazonia-1 of Brazil and 18 other satellites blasted off from this spaceport from Sriharikota in Andhra Pradesh. This is ISRO's first mission of the year. At the end of a nearly -26hour countdown, the Polar Satellite Launch Vehicle PSLV-C51 lifted off from the first launch pad of the Satish Dhawan Space Centre (SHAR), over 100 km from Chennai, at around 10.24 am.

(The above story first appeared on LatestLY on Feb 28, 2021 01:45 PM IST. For more news and updates on politics, world, sports, entertainment and lifestyle, log on to our website latestly.com).