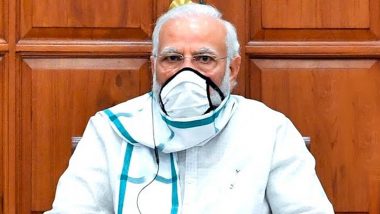 New Delhi, June 30: Amid India entering the second phase of Unlock or Unlock 2.0 from Wednesday, July 1, and against the backdrop of rising tensions with China over the border standoff in Ladakh, Prime Minister Narendra Modi will address the nation on Tuesday at 4 pm. The Prime Minister's office had informed about this development on its official Twitter handle late last night. Notably, this will be the sixth address by PM Modi to the nation after COVID-19 pandemic.

PM Modi's speech comes a day ahead of Unlock 2.0 guidelines. There is a possibility that the Premier would urge citizens to follow safety norms such as social distancing and personal hygiene. The Prime Minister may also talk about the India-China standoff at Galwan Valley. Unlock 2 Guidelines Issued by Centre: Night Curfew Timing Changed, Schools Kept Shut; What Is Allowed and What is Prohibited Till July 31, See Full List.

The YouTube channel of Prime Minister's Office (PMO) is hosting live streaming of PM Modi's address to the nation. His speech will also be telecast live on Doordarshan and DD News.

In his monthly "Mann ki Baat" radio programme on Sunday, PM Modi said that India has given a "befitting reply to those who cast an evil eye on its territory". Meanwhile, on Monday, the Government of India passed an order to ban 59 Chinese applications in the country.

(The above story first appeared on LatestLY on Jun 30, 2020 03:23 PM IST. For more news and updates on politics, world, sports, entertainment and lifestyle, log on to our website latestly.com).