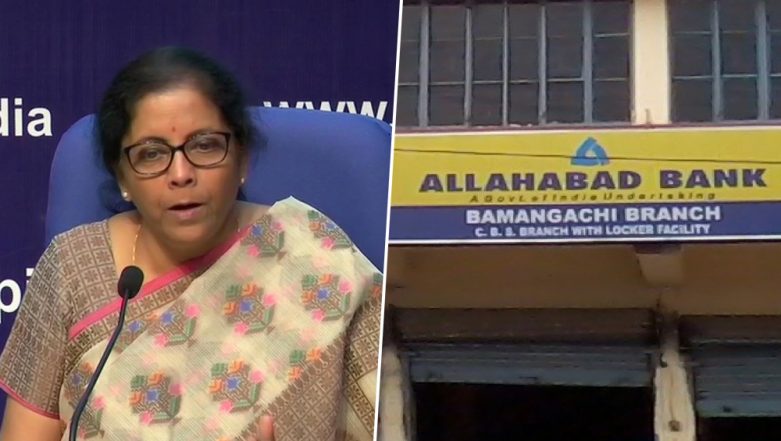 New Delhi, August 30: Finance Minister Nirmala Sitharaman on Thursday announced the merger of a slew of public sector banks into single entities. The decision comes in wake of the ongoing economic slowdown, with critics claiming that the government is facing an "unprecedented liquidity crisis". The mergers will strengthen the condition of state-run banks and will allow them to ensure efficiency, Sitharaman announced. Sitharaman Hits Back at Congress' 'Unfit Economy' Barb, Recalls UPA Era of 'Double Digit Inflation'

Four bank mergers have been listed by the Finance Minister. They are as follows: Punjab National Bank, Oriental Bank of Commerce and United Bank will become a single entity; Canara Bank and Syndicate Bank and the third entity will be the amalgamation of Union Bank of India, Andhra Bank and Corporation Bank. The fourth merger is of the Indian Bank and Allahabad Bank.

"Punjab National Bank, Oriental Bank of Commerce and United Bank will be brought together and they shall form the second largest public sector bank with business of Rs 17.95 lakh crore," Sitharaman was reported as saying.

"Canara Bank with (merge) Syndicate Bank, they will be the fourth largest Public Sector Bank with business of Rs 15.20 lakh crores," he added.

Sitharaman said the move is part of the Narendra Modi government's concerted strategy to improve the health of public sector lenders. The efforts taken in the last five years has significantly cut down on the non-performing loans, while the recovery of loans has also notably improved.

Since the last two years, the Centre has been merging several state-run banks into a single entity, in a bid to strengthen their fiscal position. In 2017, there were 27 public sector banks after today's announcement there will be 12 public sector banks, the Finance Minister added.