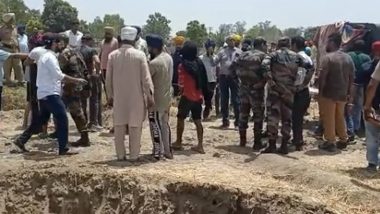 Hoshiarpur, May 23: The autopsy of the six-year-old boy, who died after falling into a 300-foot-deep borewell, revealed that he had drowned as excess water was found in his lungs, officials said.

A case under relevant IPC sections, including 304 A (causing death by negligence), has been registered against Satvir Singh, the owner of the field where the Rithik Roshan fell into the borewell, a police official said. Rithik was playing in the field at Khiala Bulanda village near Bairampur on Sunday and he climbed a borewell shaft when some stray dogs started chasing him.

The nine-inch-wide shaft was covered with a jute bag and could not withstand the weight of the boy and gave in, causing him to fall into the borewell.

He was taken out of the borewell after a seven-hour-long rescue operation but he was declared dead at the hospital. Punjab: Six-Year-Old Boy Rithik Roshan Pulled Out Dead From 100-Foot-Deep Borewell in Hoshiarpur.

Rigor mortis was detected when the body was brought to the hospital on Sunday evening. Rigor mortis usually sets six to eight hours after the death, Dr Bhagat said, adding the boy might have drowned in the water in the pipe of the borewell.

The body has been handed over to the boy's family for cremation.

Superintendent of Police (Investigation), Hoshiarpur, Mukhtiar Rai said an investigation in the case was underway and further action would be taken accordingly.