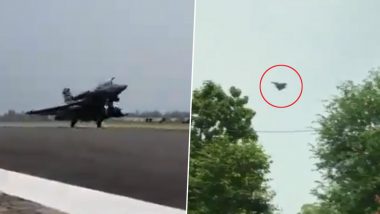 Ambala, July 29: In a historic moment, the first batch of five Rafale jets arrived in India on Wednesday, July 29. The fighter jets landed at Ambala airbase at around 3:15 pm. The first visual of India Air Force's Rafale aircraft's landing is shared by Defence Minister Rajnath Singh. The fighter jets were given water salute after landing. Rafale Fighter Jets Land in India: 1st Batch of Five 'Omnirole' Aircraft Arrives at Ambala Airbase in Haryana.

The Touchdown of Rafale at Ambala. pic.twitter.com/e3OFQa1bZY

Defence Minister described the touchdown of Rafale jets "the beginning of a new era in Military history. These multirole aircraft will revolutionise the capabilities of the @IAF_MCC."

Rafale combat aircraft is also referred to as "omnirole" aircraft. The jets are equipped with a wide range of weapons which are capable of attacking ground targets and even strike at ships. It is a 4.5 generation aircraft.

(The above story first appeared on LatestLY on Jul 29, 2020 03:50 PM IST. For more news and updates on politics, world, sports, entertainment and lifestyle, log on to our website latestly.com).