After the death of the young man, his family members and other people created ruckus inside the hospital. As the mob started vandalizing the property, the police were informed. 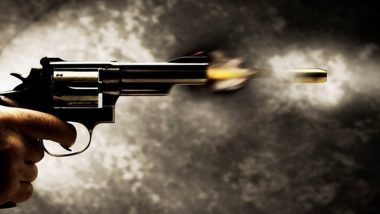 Jaipur, November 25: Tension erupted in Rajasthan's Bhilwara district following a firing incident in which a man was killed. The police imposed a 48-hour shutdown on Internet services after people took to the streets in protest over the murder.

Superintendent of Police (SP) Aadarsh Siddhu on Friday said that two accused have been detained. On Thursday four miscreants came on two bikes and shot dead a youth. Chaos was seen on the road soon after the incident. The police blocked the roads, but the killers were not caught. In view of the apprehension of a deteriorating environment, the administration imposed the Internet ban in the district for 48 hours. Rajasthan Shocker: Man Kills Friend Over Distribution of Alcohol During Party in Ajmer; Arrested.

ASP Jyeshtha Maitreyi said that two brothers, Ibrahim Pathan alias Bhura (34) and Kamruddin alias Tony (22), sons of Munshi Khan Pathan were going towards Harni Mahadev from Badla intersection in Bhilwara. Around 3.30 p.m. on Thursday, four miscreants came on two bikes and started firing at Imamuddin and Ibrahim. They fired three rounds. One bullet hit Ibrahim Pathan, who died. His brother Tony was also injured. The miscreants ran away even before the people around could understand anything. On getting the information, the police reached the spot and took both of them to Mahatma Gandhi Hospital. Rajasthan Shocker: Man Throws Wife From Bike, Stones Her to Death in Ajmer After Fight; Surrenders.

After the death of the young man, his family members and other people created ruckus inside the hospital. As the mob started vandalizing the property, the police were informed. The family has demanded a compensation of Rs 50 lakh, government job and Rs 10 lakh to the injured. After an uproar for about half an hour, the police chased them out of the hospital.

Police force was deployed everywhere in the city including Mahatma Gandhi hospital, Badla Chauraha, Bhimganj, CT Kotwali and the administration banned the Internet for the next 48 hours. The divisional commissioner issued orders regarding this.

(The above story first appeared on LatestLY on Nov 25, 2022 10:47 AM IST. For more news and updates on politics, world, sports, entertainment and lifestyle, log on to our website latestly.com).