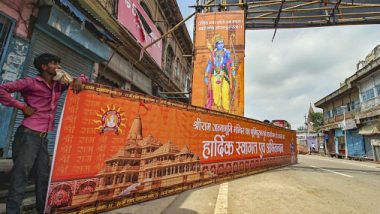 Ayodhya, August 3: As the day for Ram Mandir Bhoomi Poojan nears, all arrangements are in full swing in Uttar Pradesh's Ayodhya. The foundation laying ceremony of the Ram Temple in Ayodhya will take place on August 5. Several national leaders including Prime Minister Narendra Modi, Uttar Pradesh Chief Minister Yogi Adityanath, Rashtriya Swayamsewak Sangh (RSS) chief Mohan Bhagwat among others will grace the occasion. The security arrangements for the foundation stone-laying ceremony have been put in place and people are being requested to refrain from gathering at a place. Ram Temple 'Bhoomi Pujan' Invitation Card First Look: Invite For Mega Ayodhya Event Mentions Names of PM Narendra Modi, 4 Others; See Pics.

The countdown for the grand ceremony of 'Bhoomi Pujan' for the construction of the Ram temple has now begun. The local administration has been asked to implement strict safety protocols. Adityanath on Monday visited Ayodhya to review preparations for Ram temple ‘Bhoomi Pujan'. The Chief Minister reached Ayodhya in the afternoon and visited the Ram Janmabhoomi site where the Bhoomi Pujan is to be held.

Here are 10 Points You Should Know:

In the last months, the Shri Ram Janmabhoomi Teertha Kshetra Trust, which had initially decided to invite only 200 people for the ceremony due to the COVID-19 pandemic, planned to invite more saints for 'bhumi pujan'. Reports informed that the proposal to put up an exhibition at Ram Janmabhoomi detailing the life journey of Lord Ram has been shelved and that space will be used to make seating arrangements for around 600 more saints.

In November 2019, a five-judge Supreme Court bench headed by then Chief Justice Ranjan Gogoi, in a unanimous judgment, granted the disputed land to Hindus for the construction of the Ram temple.

(The above story first appeared on LatestLY on Aug 03, 2020 05:04 PM IST. For more news and updates on politics, world, sports, entertainment and lifestyle, log on to our website latestly.com).