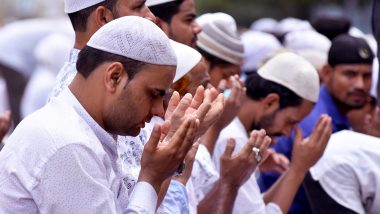 Mumbai, June 25: The Raza Academy has written a letter to Maharashtra Chief Minister Uddhav Thackeray requesting the state government to allow people to offer Friday prayers in Mosques across the country. This comes as all the gatherings, including those for religious purposes, have been restricted across the country in view of the coronavirus pandemic.

Raza Academy general secretary Saeed Noori, in his letter dated June 24, said that the Supreme Court has allowed the Jagannath Yatra in Puri with assembly of 500 people for pulling the chariots terming it as a sacred religious gathering. Darul Uloom Firangi Mahali Issues Fatwa, Says 'Muslims Must Offer Eid, Juma Alvida Namaz at Home During Lockdown'.

"In view of the Supreme Court judgment, Raza Academy appeals to kindly allow the Jummah prayers which are an essential party of the Islamic religion," the letter said.

"After the Supreme Court judgment, the academy has been receiving several calls from Islamic clerics and Muftis to urge the Maharashtra government to allow the prayers in mosques immediately," it added. The academy said that the entire community is restless and is concerned for its religious duties.