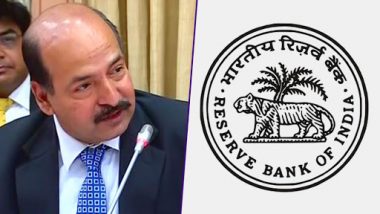 New Delhi, July 1: Days after Viral Acharya resigned from the post of Deputy Governor of Reserve Bank on India, NS Vishwanathan has been reappointed on his post on Monday for one year. The appointment comes in the wake of Acharya's resignation, who had cited personal reasons for this step.

Considering the track record of NS Vishwanathan, who had appointed RBI's Deputy Governor has been given additional charge of Acharya. Vishwanathan took to the office on July 4, 2016, after he was appointed by the committee on June 28, 2016. Congress On RBI Dy Governor Viral Acharya's Resignation: 'Government Changes, But 'Economic Manhandling' Remains'

According to the RBI's website, currently, there are three Deputy Governor, besides Governor Shaktikanta Das. The Deputy Governors are MK Jain, BP Kanungo and NS Vishwanathan. Viral V Acharya was the fourth Deputy Governor, whose quitting the office six months prior to the tenure shook the economists and the political area.

It is to be known that Acharya was the youngest Deputy Governor, who has decided to return back to New York University Stern School of Business in August 2020. Reports state that he would be appointed as CV Starr Professor of Economics there.

(The above story first appeared on LatestLY on Jul 01, 2019 03:23 PM IST. For more news and updates on politics, world, sports, entertainment and lifestyle, log on to our website latestly.com).