The protest against the Railway Recruitment Board's two-tier exam for Non-Technical Popular Categories (NTPC) took a violent turn in Bihar and some parts of Uttar Pradesh on Wednesday. The protesters set a passenger train was set on fire while another train was attacked with stones. 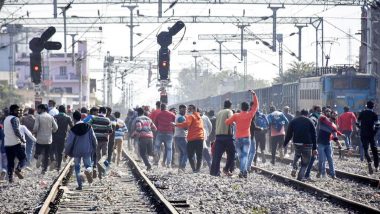 New Delhi, January 27: The protest against the Railway Recruitment Board's two-tier exam for Non-Technical Popular Categories (NTPC) took a violent turn in Bihar and some parts of Uttar Pradesh on Wednesday. The protesters set a passenger train was set on fire while another train was attacked with stones. The incident took place on the day when the country was celebrating its 73rd Republic Day.

A case was registered against 400 unknown people after the students protesting against irregularities in Railway Recruitment Board's exam set a bogie of the Bhabua-Patna Intercity Express on fire in Bihar's Gaya.. A case registered against 400 people also includes Patna's popular Khan Sir and also five other coaching operators.

Why Students Are Protesting?

#WATCH | Students protesting against alleged irregularities in a railway exam set a train on fire in Gaya, Bihar earlier today

"Railway tracks were also damaged which are being repaired. Senior officers from Railways have reached the spot," said SSP Aditya Kumar pic.twitter.com/7lVkedvmKm

Students are protesting against the RRB-NTPC exam 2021. They are opposing a decision by the Railways to hold the exam in two stages. The protesters are claiming that the second stage of the exam will be unfair for the students who have cleared the first stage as the notification issued in 2019 mentioned only one exam. Notably, the results of the first stage were declared on January 15, 2022. There are 35,000 vacancies from level 2 to level 6. The salary will range from Rs 19,900 to Rs 35,400. Around 1.25 crore candidates applied for the exam, while only 60 lakh students appeared for it. Bihar Bandh: Students Unions Call Bandh on January 28 Over Discrepancies in Railway Recruitment Board's NTPC Exam.

Here Is The Video Of The Train Being Set On Fire:

The Railways has suspended the exam. A committee was set up to resolve the grievances of the protesting students. Railway Minister Ashwini Vaishnaw urged the students not to take the law into their hands. "An email address has been set up for this purpose. The committee will go to different parts of the country and listen to grievances,: reported NDTV quoting Vaishnaw as saying.

Meanwhile, student union AISA and other youth organisations have called for "Bihar bandh" on Friday AISA General Secretary and MLA Sandeep Saurav, along with others in a press statement, said that the committee formed by the ministry is a "conspiracy" to postpone the matter till the elections in Uttar Pradesh.

(The above story first appeared on LatestLY on Jan 27, 2022 09:25 AM IST. For more news and updates on politics, world, sports, entertainment and lifestyle, log on to our website latestly.com).