Sanjay Raut's Takes a Swipe At Narendra Modi Govt, Says 'Russia Gave the First Lesson of Being 'Aatmanirbhar' to The World'

In a dig at the Narendra Modi government over its push for self-reliance, Shiv Sena leader Sanjay Raut on Sunday said Russia gave the first lesson to the world on being ''Aatmanirbhar'' by introducing a COVID-19 vaccine while India has just been preaching about it. 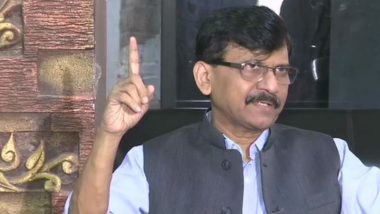 Mumbai, August 16: In a dig at the Narendra Modi government over its push for self-reliance, Shiv Sena leader Sanjay Raut on Sunday said Russia gave the first lesson to the world on being ''Aatmanirbhar'' by introducing a COVID-19 vaccine while India has just been preaching about it.

Lauding Russia for the vaccine, Sanjay Raut, in his weekly column ''Rokhtokh'' in the Shiv Sena mouthpiece ''Saamana'', said this was a sign of being a superpower and added that Indian politicians will not follow Russia's example as a model since "they are in love with America". COVID-19 Vaccine Update: First Batch of Anti-Coronavirus Drug 'Sputnik V' Produced by Russia.

Russian President Vladimir Putin on Tuesday announced that his country has developed the world's first vaccine against COVID-19 that works "quite effectively" and forms a "stable immunity" against the deadly disease, as he disclosed that one of his daughters has already been vaccinated.

"When there was a movement across the globe to prove the Russian vaccine as illegal, Vladimir Putin used the vaccine as a trial on his daughter and created self-confidence in his own country," Sanjay Raut said.

Noting that Ram temple trust head Mahant Nritya Gopal Das has tested positive for coronavirus, Sanjay Raut sought to know if Prime Minister Narendra Modi, who shook hands with Das during the temple's ground-breaking function in Ayodhya (on August 5), will quarantine himself.

Former President Pranab Mukherjee, who has tested positive of coronavirus, is in a critical condition and ministers and bureaucrats in the Modi government have also tested positive for the viral infection, he pointed out.

"Delhi (the national capital) was never under such terror like it is now due to the coronavirus. There was fear of Modi and (Home Minister Amit) Shah earlier, but the fear of corona is more than that," he said.

The Rajya Sabha member claimed Delhi has "come to a standstill" and that this is serious.

"The official unemployment figure has been put at 14 crores. But those running the country have no work. Political workers have become lazy because there are no political agitations. Opposition parties have become cold," he said.

There are no political meetings or functions in Delhi now. Even the Independence Day function preparations weren't there. "Like in Mumbai, there is a fear of coronavirus everywhere in Delhi," he said.