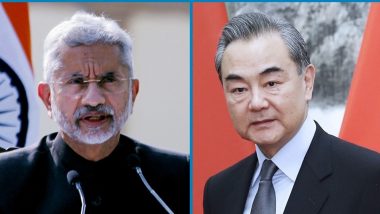 Jaishankar, who has reached the Tajik capital, will be holding bilateral talks with his counterparts from Tajikistan and Iran, Sirojiddin Muhriddin, and Hossein Amir-Abdollahian, respectively.

At media briefing here, MEA spokesperson Arindam Bagchi said: "Our EAM will be there and hopefully we will be having number of bilateral meetings. I do not want to prejudge which one. I am not rule in or rule out any meetings. So let's wait for what meetings take place." SCO Summit 2021: India to Discuss Terrorism, Afghanistan at SCO; China, Pakistan to Also Attend Meet.

Responding to a question on the India-China standoff, he said India's position was the same. "We reiterate our position that completion of disengagement in the remaining areas can pave the way forward for two sides to consider de-escalation of forces and ensure full restoration peace and tranquility and enable bilateral relations," he said.

The theme for this year's general debate is "Building resilience through hope to recover from Covid-19, rebuild sustainably, respond to the needs of the planet, respect the rights of people, and revitalise the United Nations".

To a question on a missing Hindu in Afghanistan, Bagchi said: "We have seen a missing person's report of an Indian national - Bansuri Lal in Kabul. We are in touch with all concerned. We have seen reports about local authorities undertaking investigation. We will continue to monitor situation and will tell you of any developments."

On resumption of Operation Devi Shakti, the spokesperson said: "Until and unless operations resume at Kabul airport, it will be difficult to say how people will be evacuated. It will be easier once the operations resume. We are watching this, for the remaining Indians and Afghans willing to come."

(The above story first appeared on LatestLY on Sep 16, 2021 10:33 PM IST. For more news and updates on politics, world, sports, entertainment and lifestyle, log on to our website latestly.com).