A shooting incident was reported at Shaheen Bagh, the epicentre of protests against the Citizenship Amendment Act (CAA), on Saturday. According to reports, a man fired bullets at Shaheen Bagh area. Immediately after the man opened firing, police took him into their custody. 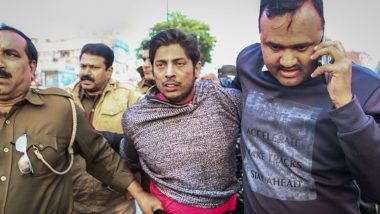 Kapil Gujjar being taken away by police after he opened fire at Shaheen Bagh (Photo Credits: ANI)

New Delhi, February 1: A shooting incident was reported at Shaheen Bagh, the epicentre of protests against the Citizenship Amendment Act (CAA), on Saturday. According to reports, a man identified as Kapil Gujjar fired bullets at Shaheen Bagh area. Immediately after the man opened fire, police took him into their custody. Till now, there are no reports of injuries in the firing. More details are still awaited. Jamia Shooting: Amit Shah Directs Delhi Police Commissioner to Take Strict Action Against Culprit, Says Incident 'Unacceptable to Centre'.

The video of the incident has also surfaced on social media.  In the video, the man could be heard saying "Sirf Hinduon ki Chalegi" (Only Hindu's will rule). Today’s incident took place two days after a man identified as Rambhakt Gopal, opened fire at people protesting against the CAA outside the Jamia Millia Islamia university in Delhi.

In the January 29 firing incident, a student of the university was injured in the firing. Before opening fire at the protesters, Gopal went live on Facebook before. He uploaded a series of videos on the social media platform. In one of his posts, he levelled “anti-Hindu” tag against the media. He was arrested and FIR was registered against him.

#WATCH Delhi: Man who fired bullets in Shaheen Bagh has been taken away from the spot by police. The man claims to be Kapil Gujjar, a resident of Dallupura village (near Noida border). pic.twitter.com/6xHxREQOe1

People at Shaheen Bagh have been protesting since December 15, 2019, days after Parliament enacted the CAA. The Citizenship Amendment Bill was passed on December 11, 2019. Widespread protests erupted across the country after the passage of the bill which grants Indian citizenship to non-Muslim migrants who suffered the religious persecution  in the neighbouring Islamic countries.

(The above story first appeared on LatestLY on Feb 01, 2020 05:21 PM IST. For more news and updates on politics, world, sports, entertainment and lifestyle, log on to our website latestly.com).