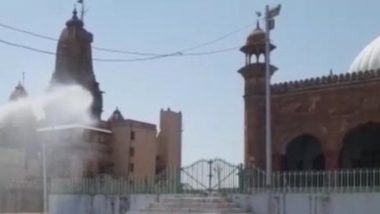 Mathura, September 30: A Mathura court on Wednesday dismissed a civil suit filed on behalf of Lord Shrikrishna Virajman for seeking removal of Shahi Idgah mosque, which stands adjacent to Krishna Janmasthan temple complex in Mathura. The court cited the Places of Worship Act, 1991, while dismissing the civil suit. The mentioned Act prohibits the conversion of any place of worship that existed on August 15, 1947. After Ram Mandir, Kashi Vishwanath And Krishna Janmasthan Temples Need to be 'Liberated', Says Karnataka Minister KS Eshwarappa.

In a claim filed in the court of Civil Judge Senior Division Chhaya Sharma on behalf of Shri Krishna Virajaman and seven others, the ownership of 13.37 acres of land of Shri Krishna's birthplace and removal of the royal Idgah mosque was demanded. The entire site where Shahi Idgah and Krishna Janmasthan temple stand next to each other is considered the birthplace of Lord Krishna by a section of Hindus.

The civil suit, filed in the name of diety "Bhagwan SriKrishna Virjman", had sought "removal of encroachment and superstructure illegally raised by Committee of Management of alleged Trust Masjid Idgah with the consent of Sunni Central Board of Waqf …at Katra Keshav Dev city Mathura belonging to deity Shree Krishna Virajman." It had termed the agreement between Masjid Samiti and Sri Krishna Janmasthana Seva Sansthan as invalid.

Some historians allege that Mughal emperor Aurangzeb destroyed the ancient Keshavnath temple, and built the Shahi Idgah mosque on its plinth. In 1968, Shree Krishna Janmasthan Seva Sangh reportedly made an agreement with the Committee of Management of Trust Masjid Idgah under which the area on which the mosque stands was given to the latter.

(The above story first appeared on LatestLY on Sep 30, 2020 05:50 PM IST. For more news and updates on politics, world, sports, entertainment and lifestyle, log on to our website latestly.com).