The information has sent security agencies into a tizzy, with many deployed on protest spots in plainclothes to keep a close tab on SFJ supporters who may mingle with protesters as part of their "ill-intention" to lure innocent farmers and take undue advantage of the situation in the name of helping them. 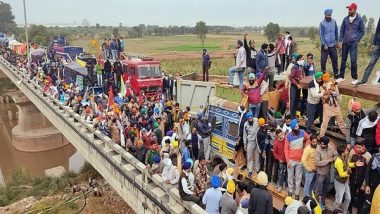 New Delhi, November 29: As thousands of farmers from Punjab, Haryana and Uttar Pradesh are rallying at Delhi's three interstate border points, banned secessionist group Sikhs For Justice (SFJ) is trying to fish in troubled waters by announcing $1 million aid for farmers who suffered injuries or damage to their vehicles while facing police action in Haryana.

The information has sent security agencies into a tizzy, with many deployed on protest spots in plainclothes to keep a close tab on SFJ supporters who may mingle with protesters as part of their "ill-intention" to lure innocent farmers and take undue advantage of the situation in the name of helping them. Trains to Punjab Diverted, Short-Terminated in View of Farmers' Protest, Says Western Railway.

In its recent announcement through a social media platform, the SFJ said it will provide $1 million aid to farmers from "Punjab and Haryana who have suffered bodily injuries or damage to their vehicles while facing police action during their hard-fought journey to Delhi".

The SFJ's message mentions its plan for opening a 24-hour call centre on November 30 in the US, Canada, the UK, France and Germany to accept online applications from farmers of Punjab and Haryana to reimburse for their losses and also to register votes for its "Khalistan Referendum".

"SFJ is kick-starting the Khalistan Referendum voting from London on August 15, 2021 for the independence of Punjab," mentions the message circulated by SFJ's US-based General Counsel and group's key leader Gurpatwant Singh Pannun -- designated a terrorist by the Indian government.

Assuring farmers of Punjab and Haryana that the SFJ will bear all the losses they have suffered, Pannun stated that "once Punjab is liberated from Indian occupation, the loans of the farmers will be waived and free power supply granted".

The group has also threatened to take up the matter at the international level if the Indian government did not repeal its three contentious farm laws enacted in September.

"If the Modi government does not scrap the farm bills, as demanded by the farmers, SFJ will initiate legal action against India at the international level with the backing of various kisan organisations," Pannun said in the message.

Security establishment, including anti-terror agencies, have since intensified efforts against the group banned by the MHA via a notification dated July 10 last year under the Unlawful Activities (Prevention) Act (UAPA) following its "anti-India activities" to disrupt law and order in the country.

However, the security officials maintained, no suspicious activity of the group has been noticed in the national capital or in the interstate border areas so far, even as central agencies are keeping a strict vigil to avoid any untoward activity.

It is the third such message circulated by the SFJ in the past one week. The SFJ earlier this week had called upon farmers of Punjab and Haryana to raise Khalistan flag at the India Gate here on the 12th anniversary of a terrorist attack in Mumbai on November 26, following which the national capital was put on high alert.

The SFJ had announced anti-India campaign, 'Referendum-2020', in November this year to seek secession of Punjab from India.

The move followed inputs that the Sikh community across India has rejected the Inter-Services Intelligence (ISI) sponsored propaganda of 'Referendum-2020'. Pakistani intelligence agency ISI has been backing the malicious campaign launched by the SFJ as a large number of Pakistani Twitter handles have started tweeting in favour of the so-called 'Referendum'.

Dubbing Sikhs in Kashmir as "freedom fighters and Sikh soldiers", the US-based Khalistani radical outfit has urged them to support its most infamous agenda, 'Referendum-2020'.

The group is already on the radar of the National Investigation Agency (NIA), which has been taking action against its key leaders such as Pannun and many others. In the beginning of September, based on NIA's inputs, the MHA had issued an order to attach the properties of Pannun and SFJ's Canada coordinator Hardeep Singh Nijjar.

(The above story first appeared on LatestLY on Nov 29, 2020 11:23 PM IST. For more news and updates on politics, world, sports, entertainment and lifestyle, log on to our website latestly.com).