Socialism will marry Mamata Banerjee in presence of Communism and Leninism. Yes, it is indeed happening on June 13 in Tamil Nadu's Salem town. 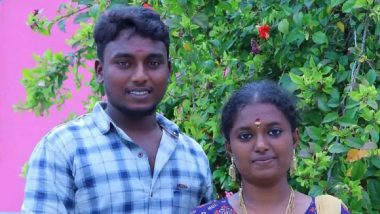 Salem, June 11: Socialism will marry Mamata Banerjee in presence of Communism and Leninism. Yes, it is indeed happening on June 13 in Tamil Nadu's Salem town. A groom named Socialism and a bride named Mamata Banerjee are getting married. Their wedding invitation has gone viral on social media for the obvious reason. Viral Wedding Card Invite With ‘Vote for Congress’ Message From Haryana Is Real and Not a HOAX!

Socialism is the youngest son of Communist Party of India (CPI) member A Mohan. Mohan named his sons after the left ideologies. Socialism's elder brothers have been named Communism and Leninism. The bride, Mamata Banerjee, hails from a family who have been Congress supporters. Mohan, who grew up in a communist family, is a devote worker of the CPI. No Queue, Only QR Code! Madurai Couple Prints Digital Scan Code on Wedding Invitation for Guests to Send Gifts, Post-COVID Wedding Trends Continue.

Speaking to a portal, Mohan said the division of the Soviet Union had made him upset because people started saying that communism was dead. "Even before my marriage I decided to name my sons or daughters in a way that reflects the ideology," he was quoted as saying. His sons have followed in his footsteps in terms of political ideology as well as in naming kids after the left ideologies.

"My first son Communism is a lawyer by profession and my second son Leninism and third son Socialism are running a silver anklet manufacturing unit in our home. All three are working for the CPI," Mohan said. Leninism has a son and he has been named Marxism. Socialism's would-be wife Mamata Banerjee is from a Congress family. She was named after Mamata Banerjee, now Chief Minister of West Bengal, when she was in Congress.

(The above story first appeared on LatestLY on Jun 11, 2021 12:32 PM IST. For more news and updates on politics, world, sports, entertainment and lifestyle, log on to our website latestly.com).