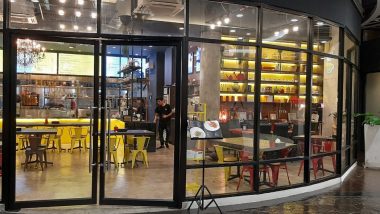 New Delhi, July 9: A total of 56 restaurants and eateries in South Delhi can serve food and beverages in open-air spaces and terraces, a decision in this regard was taken by South Delhi Municipal Corporation (SDMC).

However, the permission to serve food and liquor in open space is permitted to those restaurants which have obtained permission from the civic authority after fulfilling certain criteria.

A senior official privy with the development told IANS that as of now 56 restaurants have been permitted to serve food and beverages in open spaces like terraces. The proposal for permitting liquors and foods in open-air space with certain regulations was made by SDMC last year and the applications were invited to get permission. Goa Bar & Restaurant Owners Claim 'psychological distress', Urge Govt to Reopen.

As many as 23 licenses were granted in the South zone, 25 in Najafgarh and seven in the Central zone. Only one was granted a licence for open-air dining in the West zone.

The SDMC had passed the proposal last year in view of Covid-19 pandemic in which the restaurants would be allowed to use open-air spaces and terraces abutting licensed eateries as service areas.

Under the policy, open-air dining has been allowed only at those restaurants with privately-owned open spaces like terraces, balconies and lawns so that there is no encroachment on public land or pavements.

"Serving food and alcohol will be permitted in the open space, and the open-air area/terrace should not be covered. If the open space is visible from nearby residential premises, then additional measures to be taken to obstruct visibility," SDMC's proposal states.

It also made it clear that the service area should also not be visible from adjoining residential areas. Live performances will not be allowed and music cannot be played beyond the permissible time of 11 p.m.

The official said in the last nine months (till June-end), the civic body received 94 applications, out of which 56 were granted licences and 28 were rejected for not fulfilling the norms. Manali Issues New COVID-19 Rules After Pictures of Crowded Streets Go Viral, Rs 5,000 Fine or 8-Day Jail if Found Without Face Masks.

SDMC Mayor Mukesh Suryan talking to IANS said, "For the past few years there has been consistent demand from the people in South Delhi to allow serving liquors and foods in open-air space and it has been done considering the demand of people. The step will also help to maintain social distancing during this Covid-19 pandemic."

Suryan further added that as of now only 56 restaurants have been granted permission but this number can increase in the coming days if the applicants (restaurants and eateries owners) meet the certain rules.

(The above story first appeared on LatestLY on Jul 09, 2021 04:15 PM IST. For more news and updates on politics, world, sports, entertainment and lifestyle, log on to our website latestly.com).