The Supreme Court on Monday announced that it would begin the hearing of the petitions challenging the 10% quota for Economically Weaker Sections (EWS) from July 16. 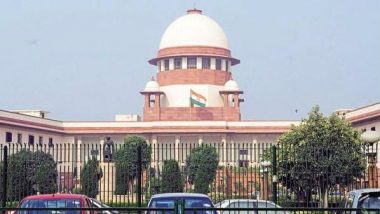 New Delhi, July 1: The Supreme Court on Monday announced that it would begin the hearing of the petitions challenging the 10% quota for Economically Weaker Sections (EWS) from July 16. The Bill was introduced by the 103rd Constitution Amendment passed by Parliament last January. The apex court also agreed to hear the plea for an interim stay of implementation of the EWS quota.

The bunch the petitions filed in the Supreme Court contended that the Union government's latest move violates the basic structure of the Constitution. Earlier, the CJI-led bench of the Supreme Court had issued on January 25 on the petition filed which stated that that the amendment introducing Articles 15(6) and 16(6) in the Constitution to provide for EWS quota in education and government jobs. Monsoon Session 2019: Jammu and Kashmir Reservation Amendment Bill for EWS Quota Passed in Lok Sabha

In the petitions, political activist Tehseen Poonawalla, Advocates Reepak Khansal and Pawan etc, claimed that a fluctuating state like economic condition cannot be made the criteria for reservation, as the intent of the affirmative action is to eradicate backwardness caused due to social and community status. The Narendra Modi government extended the quota for EWS to 10 percent, which exceeded the current 50% cap, which created political tension in the country.

(The above story first appeared on LatestLY on Jul 01, 2019 01:39 PM IST. For more news and updates on politics, world, sports, entertainment and lifestyle, log on to our website latestly.com).