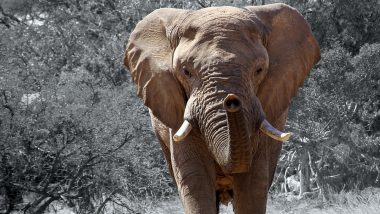 Coimbatore, July 2: Two farmers have been arrested for allegedly killing a wild female elephant at Mettupalayam forest range in Tamil Nadu's Coimbatore district. The elephant was found dead in the agricultural field near Thekkampatti village. Forest department officials said that the elephant had bullet injuries. Elephant Dies in Kerala’s Malappuram, Forest Official Says Injuries Suggest Death Was Due to Fight With Another Elephant.

The bullet mark was found near the left ear, according to the post mortem. The report concluded that the elephant was shot dead. Meanwhile, the officials have not yet revealed the names of arrested men. Pregnant Elephant, Killed After Consuming Firecracker-Stuffed Pineapple, Died Due to Drowning And Inhalation of Water Into Lungs, Reveals Post-Mortem Report.

Another elephant was found at Sirumugai area of the district. The cause of death is said to be ill-health. The animal was unwell and unable to eat for over a week. After the forest department was notified about it, they started taking care but the elephant died after three days.

Meanwhile, a carcass of an elephant was found in a private bamboo resort in Nilgiris district. Officials said that death appears to be due to electrocution as the animal might have accidentally touched a live wire or fence while trying to pull bamboo shoots.

(The above story first appeared on LatestLY on Jul 02, 2020 07:26 PM IST. For more news and updates on politics, world, sports, entertainment and lifestyle, log on to our website latestly.com).