According to official figures, 394 policemen were injured in the violence. Most of them are hospitalised while some are in ICU. On being asked about Deep Sidhu, the Punjabi actor's role in the violence at Red Fort, the Police Commissioner said anyone who is found involved will not be spared and would be strictly dealt with. 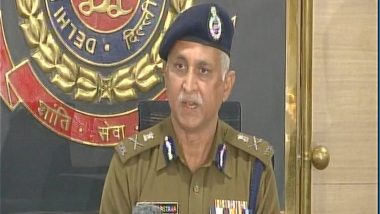 New Delhi, January 27: A day after pitched clashes between farmers and police as the tractor parade drove into areas other than those permitted, Delhi Police Commissioner S.N. Shrivastava on Wednesday said that it was a breach of trust by the protesters and those involved in the violence would not be spared.

He said that the police has collected video evidence including CCTV footage and other camera and mobile recordings and the process of identification of those indulging in violence has started. More than 25 criminal cases have been registered, 19 people arrested and as many as 50 protesters detained.

The Delhi Police chief said that after five rounds of talks with the farmers, three routes were suggested to farmers for the tractor rally from Singhu, Tikri and Gazipur borders. However, the farmers violated the agreement and moved on routes which were not designated. Tractor Rally Violence: BKU Spokesperson Rakesh Tikait Named in FIR by Delhi Police, VM Singh Withdraws From Ongoing Farmers’ Protest.

As the R-Day parade was also being held, so for the security of the people, some terms and conditions were set such as the farmers' leaders were to lead the rally, no weapons were allowed to be carried and not more than 5,000 protesters were to be allowed. However, some farmers leaders violated the agreement and went ahead with the rally before the scheduled time of 12 noon on January 26, he said. Shrivastava said that some "aggressive elements" led the protest and created ruckus and violence.

"The violent protesters broke the barricades and reached Mukarba Chowk and their leaders, Satnam Singh Pannu and Darshan Pal Singh sat there and did not move to the designated route. Pannu also gave a provocative speech there and instigated the protesters to break barricades," he said.

#WATCH | We have the video footage of those who indulged in the violence & we are analyzing them. They are being identified with the help of the face recognition system. They will be arrested and legal action will be taken against them: Delhi Police Commissioner SN Shrivastava pic.twitter.com/o6X6LSjREy

According to official figures, 394 policemen were injured in the violence. Most of them are hospitalised while some are in ICU. On being asked about Deep Sidhu, the Punjabi actor's role in the violence at Red Fort, the Police Commissioner said anyone who is found involved will not be spared and would be strictly dealt with.

"The Delhi Police maintained utmost restraint during the violent protest and that is evident from the fact that no one died in police action," Shrivastava said. Who Are Deep Sidhu and Lakha Sidhana? Know About the Two Men Being Blamed by Farmer Leaders for Tractor Rally Violence and Hoisting Flag at Red Fort.

He said that Delhi Police has taken serious note of the Red Fort violence and everyone found involved would be taken to task. He also said that face recognition system would be uised to identify those found involved in the violence.

On intelligence failure, he said that the Delhi Police was getting all intelligence inputs and were working on it. In the process, the police team also collected input on 308 malicious Twitter handles created to disrupt the rally.

(The above story first appeared on LatestLY on Jan 27, 2021 10:48 PM IST. For more news and updates on politics, world, sports, entertainment and lifestyle, log on to our website latestly.com).