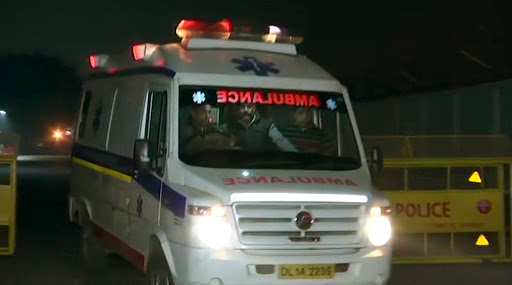 New Delhi, December 5: The 23-year-old woman from Uttar Pradesh, who was raped earlier this year and set on fire this morning outside her village by the accused, had was on Thursday brought to Safdarjung Hospital in New Delhi for medical treatment. The ambulance carrying her covered a distance of 13 kms from the airport to Safdarjung hospital in 18 minutes.

According to the details, the ambulance carrying the rape survivor covered a distance of 13 km from New Delhi's Indira Gandhi International airport to Safdarjung Hospital in just 18 minutes. She was airlifted to the Safdarjung Hospital, after she suffered around 90 percent burns. Unnao Rape Case: 23-Year-Old Survivor Set on Fire by Accused Out on Bail, Condition Critical.

Informing about the arrangements in the hospital, medical superintendent Dr Sunil Gupta said, "We have set up a dedicated ICU under the observation of Dr Shalab Kumar - Head of Burn and Plastic Surgery at Safdarjung hospital."

The ambulance carrying Unnao rape survivor covered a distance of 13 kms from the airport to Safdarjung hospital in 18 minutes. https://t.co/Xzk4cto5GY

Following the incident on Thursday, police have arrested five men -- Shubham, Shivam, Harishankar, Umesh and Ram Kishore. All these have been accused of setting the rape survivor ablaze when she was on her way to a local court for the hearing of a rape case she had filed.

Meanwhile, Uttar Pradesh Chief Minister Yogi Adityanath had stated that the treatment of the victim would be carried out on government expenses. Adding more, he said that strict action would be taken against the accused.