Uttar Pradesh Shocker: Parents of Dead Boy Try To Bring Son Back to Life Through Witchcraft, 5 Including Tantric Arrested

Reports inform that soon after a video showing an exorcist performing witchcraft to bring a dead boy back to life went viral on social media, Police launched a probe into the matter. 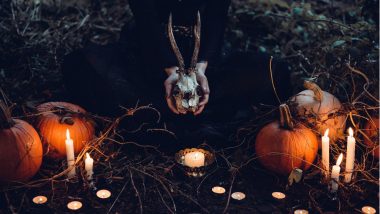 Lucknow, September 18: A shocking incident of witchcraft has come to light from Uttar Pradesh where the parents of a dead 9-year-old boy tried to bring the deceased to life by using black magic. Reports inform that soon after a video showing an exorcist performing witchcraft to bring a dead boy back to life went viral on social media, Police launched a probe into the matter. According to a report by TOI, five people have been arrested in connection with the incident. UP: Occultist Tries To Rape Girl Suffering From Jaundice on Pretext of Treatment; Arrested.

The report states that the deceased had died 23 days ago. However, in hope of a miracle, the parents of the boy made an attempt of ‘tanktrik kriya’ and performed it overnight at their home in Pharenda of Maharajganj district. The incident took place on Thursday, cops said. The TOI report states that the boy’s parents identified as Ashok Kumar and Lilavati along with tantric Raj Bahadur Sahni, his wife Usha, and their associate Rajan were arrested by the police and sent to jail. Bihar Horror: Girl 'Sacrificed', Eyes Gouged Out to Prevent Miscarriage of Expectant Mother; Occultist Among 4 Arrested.

Giving details about the victim, the report states that the deceased named Shivam was suffering from a serious ailment. He had died during treatment at the government hospital in August this year. The report adds that as he was a minor, his body was buried near a forest close to his home. On September 14, the exorcist couple approached his parents and told them they could revive the dead. Believing the couple, Shivam’s parents dug his body out of the grave and brought it home for witchcraft.

(The above story first appeared on LatestLY on Sep 18, 2021 09:44 PM IST. For more news and updates on politics, world, sports, entertainment and lifestyle, log on to our website latestly.com).