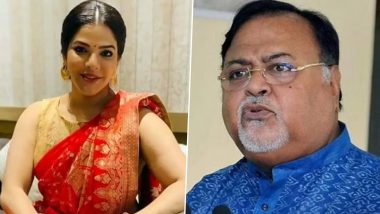 This means that the duo will spend not just the Durga Puja, but the entire festive season including Laxmi Puja, Kali Puja, Diwali, and Bhai Dooj behind the bars.

Both of them attended the hearing at the court in virtual mode. PM Narendra Modi To Lay Foundation Stone for Projects Worth Rs 29000 Crore During Two-Day Gujarat Visit on September 29.

Chatterjee's counsel made a desperate attempt to get his bail plea granted on grounds of his physical ailments and family prestige. However, the ED counsel strongly objected to his bail prayer on grounds that the investigation process by the central agency is still only on and more information relating to the crime proceeds is being unearthed every day. In such a situation, the investigation process might get hampered, he contended.

During the hearing, Mukherjee broke down into tears and sought the permission of the court to get a mobile phone so that she can talk to her mother occasionally. PFI Ban: Centre Directs States, Union Territories To Exercise Powers of UAPA Against Popular Front of India and Its Affiliates.

However, the ED counsel ridiculed her tears and reminded the court that even Chatterjee broke down into tears during a previous hearing in the matter. "But their tears do not justify their involvement in the multi-crore scam. Can't they see the tears of the eligible candidates deprived of their legitimate job offers who are protesting on the open streets of Kolkata for days," the ED counsel argued.

Finally, after hearing all the parties concerned, the court rejected the bail pleas of both Chatterjee and Mukherjee and extended their judicial custody.

(The above story first appeared on LatestLY on Sep 28, 2022 09:36 PM IST. For more news and updates on politics, world, sports, entertainment and lifestyle, log on to our website latestly.com).