Prime Minister, Narendra Modi will be on a two-day visit to Gujarat from September 29 to launch various development and infrastructure projects worth 29,000 crores spread across Gujarat. 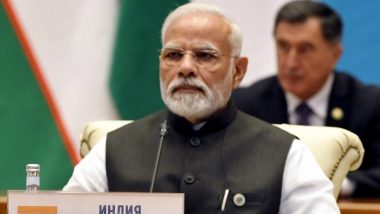 Prime Minister, Narendra Modi will be on a two-day visit to Gujarat from September 29 to launch various development and infrastructure projects worth 29,000 crores spread across Gujarat.

Surat, Bhavnagar, Ahmedabad and Ambaji are on the list of cities where PM Narendra Modi will inaugurate and lay the foundation stone of several projects. These projects are aimed to facilitate world-class infrastructure, enhanced mobility and improved ease of living, according to a government statement.

PM to declare open the 36th National Games; being held for the first time in Gujarat. Prime Minister Modi will inaugurate the 36th National Games of India at Narendra Modi Stadium in Ahmedabad. It is the first time that Gujarat is hosting the National Games, which will be held between 27 September to 10 October 2022. Nearly 15,000 sportspersons, coaches, and officials from across the country will be participating in 36 sports disciplines, making it the biggest National Games ever. The sporting events will be organised in six cities of Ahmedabad, Gandhinagar, Surat, Vadodara, Rajkot and Bhavnagar.  Lt Gen Anil Chauhan Appointed New Chief of Defence Staff: All You Need To Know About Gen Bipin Rawat's Successor.

In the last episode of “Mann ki Baat”, PM Modi said, “National Games are being organized in Gujarat from 29 September…my best wishes to every player who participated in this sports championship. To encourage the players on this day, I will be present there”.

PM Modi will inaugurate Phase-I of the Ahmedabad Metro project. Among the launch of infrastructural projects is the inauguration of Phase 1 of the Ahmedabad Metro project by PM Modi at a public function at the Ahmedabad Education Society in Ahmedabad. The project is spread across 32 km of the East-West corridor from Apparel Park to Thaltej and North-South corridor between Motera to Gyaspur. The Thaltej-Vastral route in the East-West corridor has 17 stations. This corridor also has a 6.6 km underground section with four stations. The 19 km North-South corridor that connects Gyaspur to Motera Stadium has 15 stations. The entire Phase 1 project is built at a cost of more than Rs. 12,900 crores. Congress President Election: Digvijaya Singh To File Nomination for Party Chief Post.

He will also flag off Vande Bharat Express between Gandhinagar and Mumbai at Gandhinagar station and travel on the train from there to Kalupur Railway Station.

Prime Minister will flag off the Ahmedabad Metro rail project and will take a metro ride from Kalupur station to Doordarshan Kendra metro station. Amid the festival season, PM will also be taking part in the Navratri Festival celebrations in Ahmedabad at the GMDC ground in Ahmedabad.

PM to inaugurate Phase-I of DREAM City project in Surat. Prime Minister will lay the foundation stone and dedicate various projects worth more than Rs. 3400 crores in Surat. These include works for water supply, drainage projects, DREAM City, Biodiversity Park and other development works such as public infrastructure, heritage restoration, city bus / BRTS infrastructure, electric vehicle infrastructure as well as joint development works by the central and state government.

PM will launch the Phase-I of road infrastructure works and the main entrance of Diamond Research and Mercantile (DREAM) City. DREAM City project has been launched with the vision to meet the growing demand for commercial and residential space to complement the rapid growth of the diamond trading business in Surat. Prime Minister will also lay the foundation stone for Phase II of the project. The 87-hectare project of Biodiversity Park and Khoj Museum at Science Centre in Surat are among the big development projects which PM will launch in Surat, Gujarat.

(The above story first appeared on LatestLY on Sep 28, 2022 08:43 PM IST. For more news and updates on politics, world, sports, entertainment and lifestyle, log on to our website latestly.com).