Nine new cabinet ministers were inducted into the Amarinder Singh government in Punjab on Saturday, while two women ministers were elevated to cabinet rank. 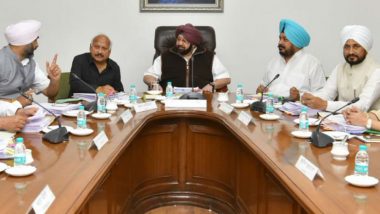 Chandigarh, April 21 :  Nine new cabinet ministers were inducted into the Amarinder Singh government in Punjab on Saturday, while two women ministers were elevated to cabinet rank.

Governor V.P. Singh Badnore administered the oath of office and secrecy to the new ministers - all first-timers - at the Raj Bhawan here on Saturday evening.

Majority of the new ministers are loyalists of the chief minister.

With the cabinet berths being full now, a number of hopeful leaders in the ruling party are sulking. Some of them have offered to resign from Congress party posts to show their resentment.

It is learnt that senior Congress leaders, including Congress party in-charge for Punjab Asha Kumari, spoke to some of the disgruntled legislators to pacify them.

Decks were cleared on Friday by the Congress high command for the induction of nine new ministers.

Their names were approved in New Delhi on Friday following two days of meetings between Amarinder Singh and Congress President Rahul Gandhi and other Congress leaders.

The Congress won the Assembly elections by a thumping majority in March last year, getting 77 legislators in the 117-member Assembly. The state cabinet can have a maximum strength of 18 ministers, including the Chief Minister, under the law.

(The above story first appeared on LatestLY on Apr 21, 2018 06:46 PM IST. For more news and updates on politics, world, sports, entertainment and lifestyle, log on to our website latestly.com).