Nadda after releasing the party's manifesto for the Assam elections said that the law, (which does not find a mention in the manifesto), is a central legislation and the Congress claim that they will not allow its implemenation in the state, if voted to power, may be either "due to their ignorance or they are trying to fool the people of the state". 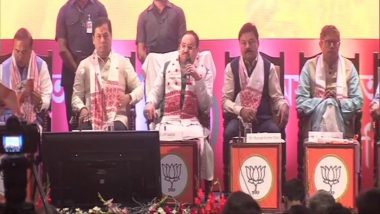 Guwahati, March 23: BJP President J P Nadda on Tuesday asserted that the Citizenship Amendment Act (CAA) has been passed by the Parliament and will be implemented "in time".

Nadda after releasing the party's manifesto for the Assam elections said that the law, (which does not find a mention in the manifesto), is a central legislation and the Congress claim that they will not allow its implemenation in the state, if voted to power, may be either "due to their ignorance or they are trying to fool the people of the state".

"I do not want to comment on the Congress thinking but their approach is not only problematic but also dangerous for the state", he said. The highly contentious CAA seeks to provide Indian citizenship to Hindus, Jains, Christians, Sikhs, Buddhists and Parsis entering India on or before December 31, 2014 from Bangladesh, Pakistan and Afghanistan after five years of residence here. BJP Manifesto for Assam Assembly Elections 2021: From 'Corrected' NRC, Jobs to Aahar Aatmanirbharta, Here Are Bharatiya Janata Party's 10 Sanklap For The State.

Assam's identity is inextricably linked to Vaishanav saint Srimanta Sankardeva, Bharat Ratnas Dr Bhupen Hazarika and Gopinath Bordoloi and "now can we allow it to be linked with Badruddin Ajmal" (AIUDF chief with whose party the Congress has entered into an alliance for the state polls). The BJP is committed to protect and preserve the "identity and culture" of Assam, keeping the "natural process of cultural change intact".

Referring to the issue of infiltration, the BJP president said that the party is committed to strengthening and scientific management of the international borders. "Border management is a continuous process and we will continue to improve it", he said.

Asked about the implementation of the clause six of the Assam accord to ensure the constitutional safeguard of the linguistic, cultural, social identity and heritage of the Assamese people, Nadda said, "it is under process and we are committed to it".

The BJP in its manifesto has made "ten commitments" for an 'Atmanirbhar Assam' which include initiation of process of correction and reconciliation of the entries under the Supreme Court mandated National Register of Citizens to "protect genuine Indian citizens and exclude all illegal immigrants".

The BJP has also pedged to protect the political rights of the people of the state through a delimitation exercise. The party also promised that Assam will be made free from the vagaries of flood by launching "Mission Brahmaputra" with a multi-pronged strategy involving the dredging of the river and building reservoirs to store excess water from Brahmaputra and its tributaries. The party committed to enhance payments to women under the 'Orundoi' scheme to Rs 3000 per month from the existing Rs 830 for their economic empowerment and will cover 30 lakh women in a phased manner.

The party also promised to launch 'Mission Shishu Unnayan' to provide free education to every child of Assam in government institutions and provide free bicycles to all school students from class eight onwards to increase access to schooling. Assam Assembly Elections 2021 Dates: Polling in 3 Phases on March 27, April 1 And April 6, Results on May 2; Check Full Schedule.

The party also pledged to provide two lakh government jobs to the youths of Assam and of these one lakh will be provided by March 31, 2022 and also enable the provision of eight lakh jobs in the private sector, making the state the fastest job creator in the country. It also assured to create 10 lakh youth entrepreneurs through the Swami Vivekananda Assam Youth Employment Yojana (SVAYEM) with two lakh youths to be supported each year for the next five years.

BJP also pledged to launch the 'Assam Aahar Atmanirbharta Yojana' to deploy technology, financial and administrative incentives to steer the state towards self-sufficiency in essential food items, especially fish, poultry, piggery, dairy and horticulture products within the next five years. It also promised to empower people with land rights by distributing land pattas with requisite rights to all landless citizens of the state in a phased manner.