The condition of senior Samajwadi Party leader Azam Khan remains critical, the private hospital where he is undergoing treatment said in its latest health update on Saturday. 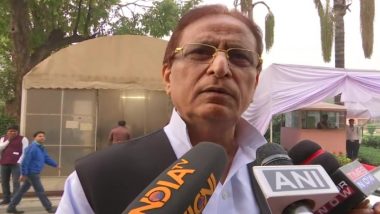 Lucknow, May 29: The condition of senior Samajwadi Party leader Azam Khan remains critical, the private hospital where he is undergoing treatment said in its latest health update on Saturday. Azam Khan and his son Abdullah Azam Khan had tested positive for coronavirus (COVID-19) on April 30. The father-son duo was shifted from a Sitapur prison to the hospital for coronavirus treatment on May 9. Azam Khan Gets Permission To Sell His Gun.

"Condition of Samajwadi Party leader Azam Khan is critical. He is on oxygen support," a statement issued by the Medanta Hospital, Lucknow, said. Khan was shifted to the intensive care unit (ICU) on May 26 after his condition deteriorated. On May 24, the hospital conducted scanning of Khan and found cavity and fibrosis in his lungs. His condition has been critical since he contracted coronavirus. SP's Cycle Yatra in Support of Azam Khan Culminates in Lucknow.

The 72-year-old former Uttar Pradesh minister, along with his son and wife Tazeen Fatma, was lodged in the jail in February last year in connection with various cases. The Allahabad High Court had in December granted bail to Tazeen Fatma in all 34 cases registered against her.

After Khan tested positive for COVID-19, the jail administration had reportedly tried to convince him for treatment at Lucknow's King George's Medical University. However, the SP leader had refused to move out of the jail. He could be convinced on May 9 and was admitted to the Medanta Hospital.

(The above story first appeared on LatestLY on May 29, 2021 11:23 AM IST. For more news and updates on politics, world, sports, entertainment and lifestyle, log on to our website latestly.com).