Upset over resignation of BS Yediyurappa from the Karnataka Chief Minister's post, one of his supporters allegedly committed suicide on Monday. 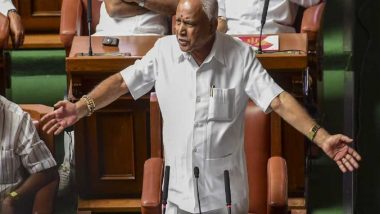 A day after Ravi's alleged suicide, Yediyurappa expressed grief and urged his supporters to not "go overboard with fandom". "The death of Rajappa (Ravi) because of my resignation has caused me great pain and sadness. Rise and fall in politics is natural. It is not right to sacrifice one’s life because of this. The void to the family caused by one’s death can never be filled," the translated version of Yediyurappa’s tweet read. BS Yediyurappa Resigns As CM of Karnataka: Who Will Be New Karnataka CM? Check List of BJP’s Possible Frontrunners for the Key Post.

After months of speculation over his resignation, Yediyurappa on Monday announced his resignation and put in his papers before the Governor. The BJP leader, who was first elected from the Shikaripura Assembly constituency in 1983 and went on to win eight times from the same seat, took oath as Karnataka Chief Minister four times. But he could never complete full term.

Immediately after the resignation of Yediyurappa, BJP national president JP Nadda, Union Home Minister Amit Shah and Parliamentary Affairs and Mining Minister Prahlad Joshi held a closed door meeting in Delhi to discuss the state developments. It is said that the new Chief Minister will take oath by July 29.

(The above story first appeared on LatestLY on Jul 27, 2021 01:34 PM IST. For more news and updates on politics, world, sports, entertainment and lifestyle, log on to our website latestly.com).