Earlier in the day, Shah also inaugurated the exhibition held for the work done in the border area by the Border Security Force (BSF) and also by the Gujarat government. 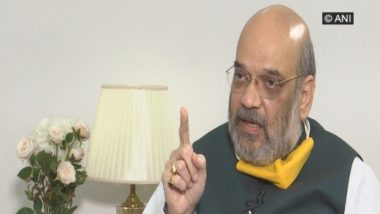 Gandhinagar, November 12: Union home minister Amit Shah on Thursday said that the recently held election results showed that 135 crore people of the country are standing with PM Narendra Modi. Shah was speaking at a programme held for the Border Areas Development Programme (BADP) at Dhordo, Kutch in Gujarat.

"Some people in the country see negative in everything and anything, even if it is positive and complain about the Modi government's decisions and see it as failures. But recent results of elections in 11 states have sent out a clear message that the 135 crore people of India are standing like a rock with Prime Minister Narendra Modi." Shah added, "The people of India have wiped out such negative forces in the recently held elections." Vikasotsava 2020: Citizens of Border Areas, Defence Forces Are Stakeholders in Maintaining Security, Says Amit Shah.

Shah was visiting the Tent City of Dhordo in Kutch to address the first Sarpanchs Convention of border villages, in which village heads of 158 villages on Gujarat's border with Pakistan, from three districts, Kutch, Patan and Banaskantha participated. Earlier in the day, Shah also inaugurated the exhibition held for the work done in the border area by the Border Security Force (BSF) and also by the Gujarat government.

"I promise one thing that, under the leadership of prime Minister Narendra Modi, everyone should rest assured that no one can turn a greedy eye towards our country and no one can break us. The soldiers on our borders are also confident that the prime Minister will be behind them in all matters," Shah added.

Before coming to Dhordo, Shah visited the Mata na Madh temple and offered his obeisance to Goddess Ashapura.

Later in the evening, he will meet BSF officials and Gujarat government officials at the Bhuj Circuit house.

(The above story first appeared on LatestLY on Nov 12, 2020 06:19 PM IST. For more news and updates on politics, world, sports, entertainment and lifestyle, log on to our website latestly.com).