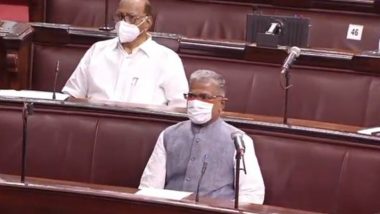 Harivansh Narayan Singh defeated Manoj Kumar Jha in the election to Rajya Sabha's Deputy Chairman's post. Jha was supported by 12 opposition parties, including Congress. "The respect I hold for Harivansh ji, each member of the House shares. He has earned this respect. His unbiased role in the Parliament strengthens our democracy," Prime Minister Narendra Modi said. "After becoming an MP, Harivanshi ji has always ensured how all MPs can become more dutiful. The journalist inside him has stayed alive," he added.

Congress MP Ghulam Nabi Azad also praised the newly-elected Deputy Chairman. "This is the second time he has been elected as the deputy chairman of the House. I congratulate him. He has been just to members of all parties," Azad said after Singh was elected. The process of electing Deputy Chairman begins with a Rajya Sabha MP submitting a motion proposing the name of a colleague for the post.

BJP MP Jagat Prakash Nadda submitted a motion proposing Singh's name for the post of Deputy Chairman. The motion must be seconded by another Rajya Sabha MP. The motion proposing Singh's name for Deputy Chairman's post was seconded by BJP MP Thaawarchand Gehlot. Singh previously held the post till his term ended in April this year.

(The above story first appeared on LatestLY on Sep 14, 2020 05:35 PM IST. For more news and updates on politics, world, sports, entertainment and lifestyle, log on to our website latestly.com).