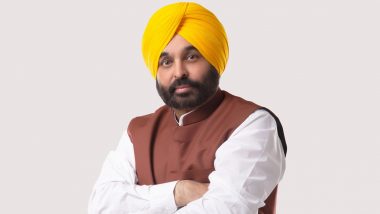 Chandigarh, March 10: Bhagwant Mann, MP from Sangrur and Aam Aadmi Party's face for the Punjab assembly polls, is set to be the next chief minister with the party poised for a historic verdict in the state.

Mann has won from Sangrur district's Dhuri assembly constituency by a margin of 58,206 votes over Congress' Dalvir Singh Goldy. Punjab Election Results 2022: The Rise of Aam Aadmi Party in Punjab.

Born in Satoj village of Sangrur in 1973, Mann started his career as a comedian. He began his political career in 2011 with the Punjab Peoples Party, which is led by Manpreet Singh Badal. In 2012, he fought the elections from the Lehragaga constituency but lost.

Later, he joined the Aam Aadmi Party in 2014 and contested the election from the Sangrur Lok Sabha seat. His importance in Punjab politics increased when he defeated the veteran leader of Punjab Sukhdev Singh Dhindsa, who was then with Shiromani Akali Dal (SAD).

Mann has been elected to the Punjab Lok Sabha seat of Sangrur for two terms in a row since 2014.

He gained popularity from his satires in TV show 'Jugnu Mast Mast'. He also featured in several other comedy shows.

According to the Election Commission of India, AAP has won 20 seats and is leading on 71 others at 2:40 PM in the 117 seat Punjab assembly.

As AAP wins Punjab, it will be the party's maiden victory in the state and a vast improvement from its performance in the 2017 elections when it had finished second behind Congress.

Congress went into the polls, battling factionalism and anti-incumbency. The party changed its Chief Minister in September last year even as the party's new state unit chief Navjot Singh Sidhu hinted about his own chief ministerial ambitions. Congress finally declared Charanjit Singh Channi as the first Dalit Chief Minister of Punjab, endorsing him for the chief ministerial face days before the polling on February 20.

The Shiromani Akali Dal, which had broken off the alliance with the BJP over the three farm laws that were eventually repealed, tied up with Bahujan Samaj Party for the Assembly elections.

It is the first time that the BJP fought on over 65 seats in Punjab. It tied up with former Chief Minister Captain Amarinder Singh's Punjab Lok Congress and SAD (Sanyukt) led by SS Dhindsa.