PM Narendra Modi is likely to carry 20 public rallies to boost BJP election campaigns in the state. Also, he will interact with the candidates and office bearers of Karnataka through 'Narendra Modi App' at 9 am on April 25, 2018. 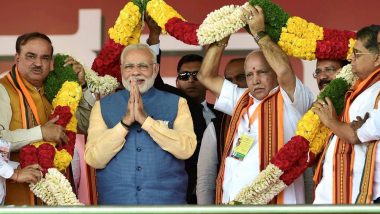 New Delhi, April 25: As the last day for filing the nominations are now over, all major political parties have descended on the election-bound state ‘Karnataka’ to woo their voters. As per a news report in NDTV, Prime Minister  Narendra Modi is likely to carry 20 public rallies to boost BJP election campaigns in the state. Also, PM Modi will interact with the candidates and office bearers of Karnataka through 'Narendra Modi App' at 9 am on April 25, 2018. The BJP official Twitter page also tweeted about the same. Uttar Pradesh  Chief Minister Yogi Adityanath is also to hold 35 public rallies in Karnataka.

PM Shri @narendramodi will interact with all candidates, office bearers, elected representatives and karyakartas of @BJP4Karnataka through 'Narendra Modi App' at 9 am on 26 April 2018. pic.twitter.com/4KrcPJuxDE

To recall, the state is ruled by the Congress party. Therefore, it is but obvious that saffron party BJP would not leave any stone unturned to win the state and make their slogan ‘Congress Mukt Bharat' (Congress Free India) a reality.

Meanwhile, much controversy has erupted after BJP gave tickets to the tainted Reddy brothers. The BJP has fielded Janardhan Reddy's aide and Lok Sabha Member of Parliament B Sriramulu as its candidate against Karnataka Chief Minister Siddaramaiah in the Badami Assembly Constituency in North Karnataka. Badami is the second constituency for the CM as he has also filed his nomination from Chamundeshwari and is expected to take on GT Devegowda of the Janata Dal (Secular). Sriramulu had earlier filed his nomination papers from Molakalmuru constituency in Chitradurga district.

The Karnataka state was in news for its iron ore mining scam as reported earlier. The Lokayukta had proclaimed losses of Rs 35,000 crore in the scam which had caused BS Yeddyurappa to quit from the CM’s role. Taking up the issue, the Congress party also attacked the Modi government. BJP gave tickets to those whose names appeared in the list of scamsters, while Congress also attacked BJP, stating that Modi has become the protector and defender of the Bellary gang (Reddy brothers).

(The above story first appeared on LatestLY on Apr 25, 2018 03:10 PM IST. For more news and updates on politics, world, sports, entertainment and lifestyle, log on to our website latestly.com).