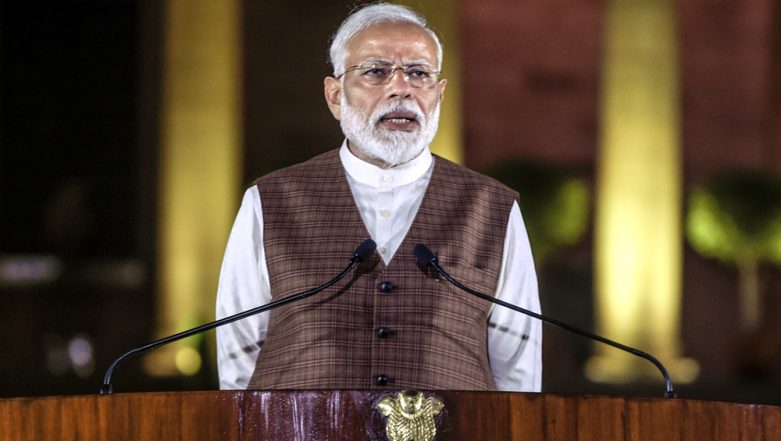 New Delhi, July 17: Prime Minister Narendra Modi on Wednesday welcomed the verdict by the International Court of Justice (ICJ) in the Kulbhushan Jadhav case. In a tweet, PM Narendra Modi said he is hopeful that Kulbhushan Jadhav will get justice. The ICJ, in its judgment, ordered Pakistan not to execute Kulbushan Jadhav and asked it to reconsider the sentence awarded to him by a military court.

"We welcome today’s verdict in the @CIJ_ICJ. Truth and justice have prevailed. Congratulations to the ICJ for a verdict based on extensive study of facts. I am sure Kulbhushan Jadhav will get justice," PM Modi tweeted. External Affairs Minister Subrahmanyam Jaishankar said he spoke to Jadhav's family following the ICJ's verdict and praised them for their courage. "Satyameva Jayate (truth alone triumphs)," Jaishankar said.

We welcome today’s verdict in the @CIJ_ICJ. Truth and justice have prevailed. Congratulations to the ICJ for a verdict based on extensive study of facts. I am sure Kulbhushan Jadhav will get justice.

Our Government will always work for the safety and welfare of every Indian.

The ICJ, in its ruling by 15-1, declared "a continued stay of execution" on Jadhav, saying it "constitutes an indispensable condition for the effective review and reconsideration of the conviction and sentence" of the accused. Ad-hoc judge, Pakistan's Tassaduq Hussain Jillani, was the dissenting voice. The ICJ had in May 2017 restrained Pakistan from executing Jadhav till the case was adjudicated on. Sushma Swaraj Welcomes ICJ Verdict, Says 'It's A Great Victory For India'.

India's Ministry of External Affairs (MEA) said the ICJ verdict upheld India's stand that Pakistan violated the Vienna Convention on several counts, adding that the judgement validates India's position on this matter fully. "We appreciate the direction by the International Court of Justice that Pakistan should review and reconsider the conviction and sentence given to Shri Jadhav by the Pakistani military court," the MEA said in a statement.

"We note that the Court has directed that Pakistan is under an obligation to inform Shri Jadhav without further delay of his rights and to provide Indian consular officers access to him in accordance with the Vienna Convention. We expect Pakistan to implement the directive immediately," the ministry added.