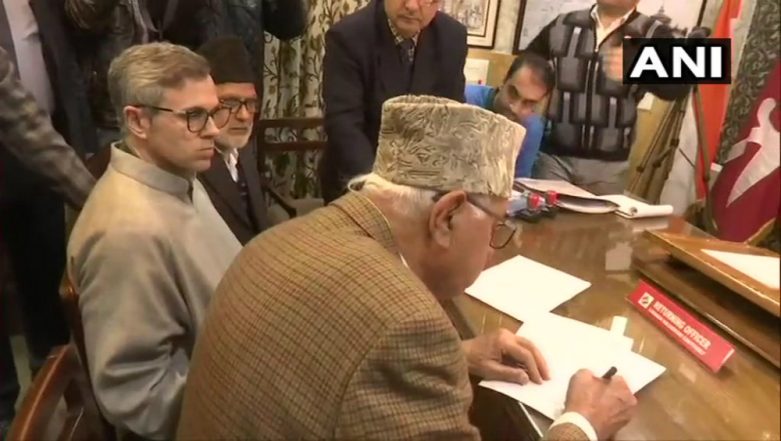 Abdullah, who is seeking re-election from the constituency, was accompanied by his son and NC vice-president Omar Abdullah and other party leaders to the office of Returning Officer, Srinagar, where he filed his nomination papers.

There was no pomp and show as only few vehicles of the NC leaders were allowed inside the deputy commissioner's office complex in Tankipora area here. Lok Sabha Elections Results 2019 Prediction by Satta Bazar: BJP to Win Over 250 Seats, Congress 74, Says Matka.

The police has barricaded the entire area as part of security arrangements to prevent any untoward incident and did not allow any supporters at the venue. The returning officer had earlier issued guidelines, saying the maximum number of people allowed at the time of filing of nomination by a candidate would be five, including the candidate, whereas the maximum number of vehicles allowed would be three.

The Srinagar Lok Sabha seat is spread over three districts of Srinagar, Budgam and Ganderbal. It has 12,90,318 voters who will cast their votes at 1,716 polling stations set up in the constituency.