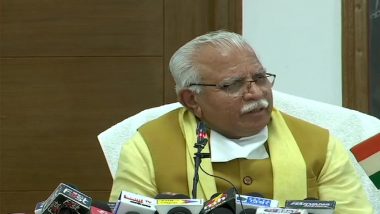 "Administration had spoken to their (protesting farmers) people yesterday. They had agreed to hold a symbolic protest but no agitation. Trusting them, the administration had made all preparations. Over 5,000 people were present at the event today. But some youth failed to keep their promise," Khattar said. "Our nation has a strong democracy where everyone has freedom of expression. We never stopped statements of these alleged farmers and leaders," he added. Farmers Agitation: Will Continue to Sit Here if Govt Doesn't Accept Demands, Says Bharatiya Kisan Union Spokesperson Rakesh Tikait.

Khattar's "Kisan Mahapanchayat" was cancelled after agitating farmers vandalised the venue at Kaimla village in Karnal. Protesting farmers also damaged stage and helipad where the Chief Minister was scheduled to land. "It is not right to obstruct anyone who wants to speak. I don't think people will tolerate violation of provisions given by Dr BR Ambedkar," Khattar said.

Today's incident gave a message to people, bigger than what I'd intended to give. These people have defamed the farmers because a farmer doesn't have such nature. A farmer can be less educated or simple but he's sensible: Haryana CM on protest at his scheduled Kisan Mahapanchayat pic.twitter.com/2TUyg7X33a

"If I have to hold someone responsible for this, then a video of Gurnam Singh Chaduni has been circulating since the day before yesterday wherein he had tried to instigate people. They are getting exposed. I think Congress and Communist parties have a major role behind these agitations," the Chief Minister asserted.

(The above story first appeared on LatestLY on Jan 10, 2021 07:16 PM IST. For more news and updates on politics, world, sports, entertainment and lifestyle, log on to our website latestly.com).