Mayawati, PM Modi Spar Over Alwar Gangrape Case: BSP Chief Asks 'How Can He Respect Others' Sisters, Wives After Leaving His Own?' 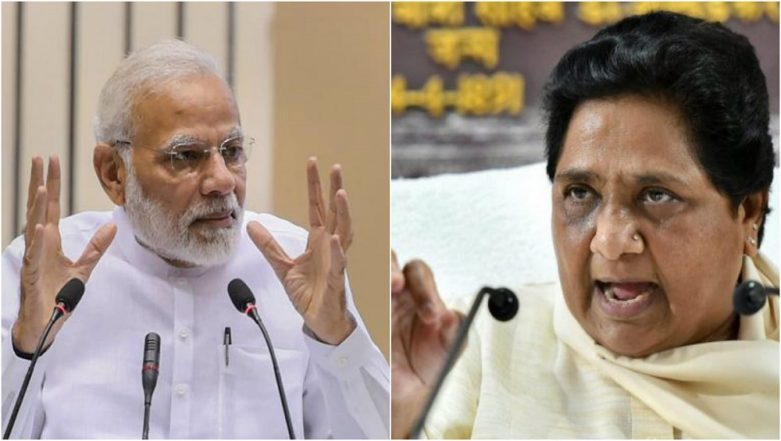 Lucknow, May 13: Bahujan Samaj Party (BSP) supremo Mayawati and Prime Minister Narendra Modi are sparring over the gangrape of a Dalit woman in Rajasthan's Alwar. Responding to the "crocodile tears" jibe of Modi, Mayawati said the PM is politicising the case as he has "no respect" for others' wives and sisters.

Mayawati accused Modi of maintaining a tacit silence on the Alwar gangrape case, until he found an opportunity to gain electoral mileage from the tragic incident. Alwar Horror: Woman Gangraped, Accused Post Video of Incident on Social Media; Case Registered

"Narendra Modi was silent on Alwar gangrape case. He's trying to play dirty politics over it. So that in the elections his party can be benefited. It is extremely shamefully. How can he respect others' sisters and wives when he has left his own wife for political gains," she said while addressing the press.

Mayawati came under PM Modi's line of attack as the BSP is supporting the Congress-led government in Rajasthan.

After the former UP CM condemned the Ashok Gehlot government in Rajasthan for allegedly adopting a lax approach towards the case, Modi said the BSP supremo is indulging in mere theatrics.

"Please do not shed crocodile tears. If you are serious, why don’t you withdraw support from the Congress government in Rajasthan," the Prime Minister said while addressing a BJP rally in Uttar Pradesh's Kushinagar.

The gangrape was reported on April 26, when a couple was stopped by the accused on Thanagazi-Alwar bypass. The men took them to an isolated area, where the woman was raped in turns while her husband was tied up.

The FIR was registered on May 2, and a team was formed to arrest all the accused. Three suspects have been arrested so far. Chief Minister Ashok Gehlot has assured to leave no stone unturned to punish those behind the heinous crime.