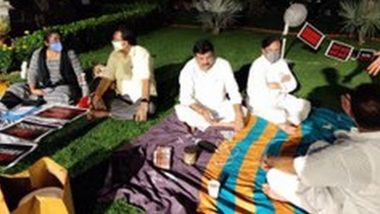 New Delhi, September 22: The eight Members of Parliament (MPs), who were earlier suspended by Rajya Sabha chairman M Venkaiah Naidu for "unruly behaviour" with deputy chairman Harivansh Singh, stayed on the lawn next to Gandhi statue in the Parliament premises on Monday.

While it became clear that the government will not initiate talks with the protesting MPs, food, pillows and bedsheets were soon spread on lawns. They also used two fans to beat the humid weather.

As DMK leader Tiruchi Siva sent homemade idlis for the MPs, tea came at around 10:30 pm along with bottles of soda for MPs to choose from. However, it has been made sure that MPs do not face any inconvenience. "People came and gave us an ambulance and doctor's number in case of any medical emergency. No one disturbed us yet," said one of the MPs.

The protests were not all about bickering and responding to Union Minister Ravi Shankar Prasad's allegations on protesting MPs for breaking decorum and intent of physically harming the deputy chairman of Rajya Sabha. Agricultural Reforms Bills Passed in Rajya Sabha: How Will Centre Ensure Farmers Get MSP, Asks P Chidambaram.