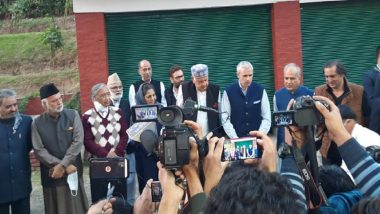 Here is a list of leaders who will attend the meeting.

Jammu and Kashmir has been under President's Rule since 2018 when then Chief Minister Mehbooba Mufti's government collapsed after the Bharatiya Janata Party (BJP) withdrew its support. Today's meeting is expected to focus on the question of beginning the political process in the union territory. There is speculation of a restoration of statehood.

(The above story first appeared on LatestLY on Jun 24, 2021 08:43 AM IST. For more news and updates on politics, world, sports, entertainment and lifestyle, log on to our website latestly.com).