Pranab Mukherjee Dies: From Campaign Manager to President of India, A Look At The Political Rise of The Congress Stalwart And Bharat Ratna 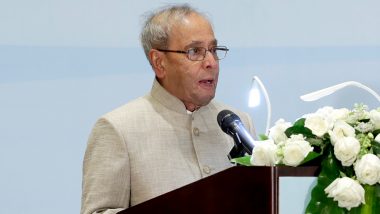 New Delhi, August 31: Former President Pranab Mukherjee died at the Army Research and Referral Hospital on Monday. Pranab Mukherjee had been hospitalized for the past 21 days and been critical following brain surgery. There was a slight improvement in Mukherjee's health condition last week thereafter it deteriorated when he developed a lung infection. His condition further had deteriorated earlier today. Mukherjee was also found to be Covid-19 positive when he was admitted on August 10. Pranab Mukherjee Dies at 84: PM Narendra Modi Expresses Grief, Says 'He Has Left Indelible Mark on Development Trajectory of Our Nation'.

Pranab Mukherjee, who served as 13th President of India, had a political career of over five decades. Born on December 11 in 1935, Mukherjee first drew attention in 1969 when he successfully managed the campaign of an independent candidate VK Krishna Menon during a by-election in Midnapore. Indira Gandhi, then Prime Minister, recognised his talent and brought him into the Congress party. Mukherjee never looked back and his political career saw a rapid rise. Pranab Mukherjee No More: 10 Inspirational Quotes of The Late Former President And Bharat Ratna That Cement His Legacy.

Mukherjee was nominated to Rajya Sabha for the first time in 1969. A powerful orator and scholar, Mukherjee was re-elected to the house in 1975, 1981, 1993 and 1999. In 1973, Indira Gandhi appointed him as Union Deputy Minister of Industrial Development in her cabinet. Known as a loyalist of the Nehru-Gandhi family, Mukherjee served as the Union Finance Minister for the first time from 1982 to 1984. It was Mukherjee who appointed Dr Manmohan Singh as Governor of the Reserve Bank of India.

In 1979, Mukherjee became Deputy Leader of the Congress in the Rajya Sabha, and in 1980 he was appointed Leader of the House. After Indira Gandhi's assassination, Rajiv Gandhi took the reins of the party and removed Mukherjee from the cabinet and sent him to manage the regional West Bengal Pradesh Congress Committee. He felt sidelined. In 1986, Mukherjee founded another party, the Rashtriya Samajwadi Congress (RSC), in West Bengal.

The RSC and Congress merged three years later after reaching a compromise with Rajiv Gandhi. Following the assassination of Rajiv Gandhi in 1991, PV Narasimha Rao chose to appoint Mukherjee as deputy chairman of the Planning Commission and subsequently as a union cabinet minister. Mukherjee served as External Affairs Minister for the first time from 1995 to 1996 in Rao's cabinet.

When the Congress-led United Progressive Alliance (UPA) came into power in 2004, Mukherjee won a Lok Sabha seat for the first time. From then until his resignation in 2012, he was practically number-two in Prime Minister Manmohan Singh's government. He held a number of key cabinet portfolios – Defence (2004–06), External Affairs (2006–09) and Finance (2009–12). In 2012, the UPA nominated him for the post of President of India and subsequently, he was elected.

In 2017, Mukherjee decided not to run for re-election and to retire from politics after leaving the presidency. Besides holding several key posts in the government, he was a member of the Congress Working Committee, the highest policy-making body of the Party for a period of 23 years. He was awarded Bharat Ratna, India's highest civilian award, in 2019.

(The above story first appeared on LatestLY on Aug 31, 2020 06:22 PM IST. For more news and updates on politics, world, sports, entertainment and lifestyle, log on to our website latestly.com).