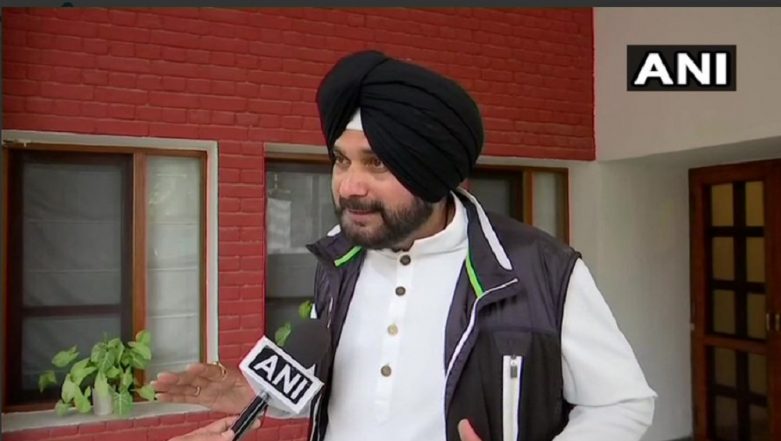 Chandigarh, February 15: While a suicide attack which killed 45 CRPF troopers evoked widespread condemnation and calls for action against Pakistan, Punjab cabinet Minister Navjot Singh Sidhu sounded a discordant note on Friday saying the dialogue with Islamabad should continue. Sidhu, who takes every opportunity to harp on his friendship with Pakistan Prime Minister and former cricketer Imran Khan, said: "Where ever wars are fought and such things (Pulwama type attack) happen, dialogue also continues simultaneously. There is a need to find a permanent solution to (issues between India and Pakistan). "Such people (terrorists) have no religion, no country and no caste. When a snake bites, its anti-dote is also snake poison," Sidhu said, justifying his take on the matter regarding dialogue between the two nuclear neighbours.

Sidhu condemned the Pulwama terror attack on the Central Reserve Police Force (CRPF) convoy on Thursday which killed 45 troopers but added that the entire nation (Pakistan) could not be blamed for the actions of a handful people. Pulwama Attack: Pay Real Tribute by Donating Money For Bravehearts Via 'Bharat Ke Veer' App or Online at bharatkeveer.gov.in.

Punjab Min Navjot Singh Sidhu: What has this bloodshed got to do with Kartarpur? It connects-people, hearts. When a person becomes a pilgrim out of devotion,he becomes a different person. What I feel is we should deliberate over this, find the root cause of the problem&uproot it. pic.twitter.com/dgrzPwuyRj

"This (attack) should be condemned by all. For a handful people, you cannot blame an entire nation. Those behind the attack must be punished," Sidhu said.