India observes the 77th birth anniversary of former Prime Minister of India, Rajiv Gandhi, on Friday, i.e. August 20. Rajiv Ratna Gandhi was born on August 20, 1944, to Indira Gandhi and Feroze Gandhi in Bombay (now Mumbai). He served as the seventh prime minister of India from the year 184 to 1989. 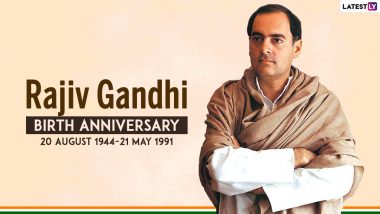 Rajiv Gandhi was forced to join politics by his mother and the then Prime Minister of the country Indira Gandhi after the death of his younger brother Sanjay Gandhi. Rajiv Gandhi died on May 21, 1991, at Sriperumbudur, near Madras (now Chennai), in a bomb attack orchestrated by the Tamil Tiger. Rajiv Gandhi Birth Anniversary: Notable Quotes by The Congress Leader Who Served as Youngest PM of India.

Sadbhavana Diwas observance began on August 20, 1992, which marked the 48th birth anniversary of Rajiv Gandhi. The "Sadbhavana pledge" is taken by admirers of Gandhi on this day to reaffirm the values of tolerance, communal harmony, brotherhood and national integration. The Sadbhavana Pledge reads, "I take this solemn pledge that I will work for the emotional oneness and harmony of all the people of India regardless of caste, creed, region, religion or language." Rajiv Gandhi's 77th Birth Anniversary: IYC, NSUI to Organise Blood Donation Camps, Photo Exhibition, Sports, Cultural Events in Delhi.

Rajiv Gandhi will always be remembered as a visionary leader. He brought technological advancements in India. However, his term as the PM also remains controversial due to the Shah Bano case and allegations of corruption in the Bofors deal. Rajiv was the second member of the Nehru-Gandhi family to be killed by extremists within a span of seven years. He died at the young age of 44. His assassination day is observed as National Anti-Terrorism Day.

(The above story first appeared on LatestLY on Aug 20, 2021 07:30 AM IST. For more news and updates on politics, world, sports, entertainment and lifestyle, log on to our website latestly.com).