Sachin Pilot Reacts After Being Removed As Rajasthan Deputy CM, Changes his Bio on Twitter 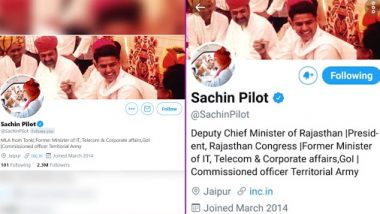 Jaipur, July 12:  Minutes after Sachin Pilot was removed from the post of Deputy Chief Minister and Rajasthan PCC Chief, he took to Twitter and said that truth can be disturbed, cannot be defeated. The Congress removed the  44-year-old leader as Rajasthan Deputy CM and state Congress chief and two other ministers in Pilot's camp. Following the latest developments in Rajasthan politics, Pilot changed his bio on Twitter after being removed as Rajasthan Deputy Chief Minister and state Congress unit chief.

Congress spokesperson Randeep Surjewala announced that along with Pilot, Tourism Minister Vishvendra Singh and Food and Civil Supplies Minister Ramesh Meena have also been removed from their post. Govind Singh Dotasra, who is the  current Education Minister in Rajasthan, has been appointed as the new PCC chief in Rajasthan.

Pilot's nameplate was removed from Congress headquarter in Jaipur after he was removed from the post. "I regret that Sachin Pilot and some of his associates have been swayed by BJP's plot and are now conspiring to topple the Congress govt elected by 8 crore Rajasthanis. It is unacceptable", RS Surjewala said.

(The above story first appeared on LatestLY on Jul 14, 2020 02:29 PM IST. For more news and updates on politics, world, sports, entertainment and lifestyle, log on to our website latestly.com).