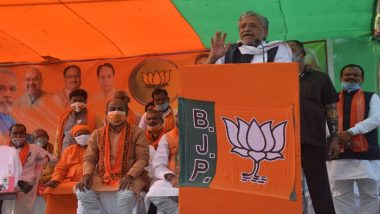 Patna, November 27: Sushil Kumar Modi, former Deputy Chief Minister of Bihar, was nominated for Rajya Sabha by the Bharatiya Janata Party (BJP) on Friday. Sushil Kumar Modi was made the Deputy Chief Minister and worked as a close aide to Chief Minister Nitish Kumar in the previous NDA government in the state.  But this time Sushil Modi was virtually sidelined. He was not even made a minister in Nitish Kumar's cabinet. Bypoll to Rajya Sabha Seat Vacated Due to Ram Vilas Paswan's Death on December 14: EC.

Tarkishore Prasad, a BJP MLA from Katihar, and Renu Devi, a legislator from Bettiah were made Deputy CMs. Sushil Modi's exclusion from Nitish Kumar's cabinet raised eyebrows. There was a buzz that the BJP would bring him to Delhi. Apart from Sushil Modi, Nandkishore Yadav, who was the Road Construction Minister in the previous NDA government, and Dr Prem Kumar, Agriculture Minister, were also sidelined by the BJP. BJP Leader Vijay Kumar Sinha Becomes Speaker of Bihar Assembly.

The NDA bagged 125 seats in the recent Bihar assembly elections of which the BJP won 75, Janata Dal (United) 43 and four seats each were won by NDA allies - Hindustani Awam Morcha (HAM) and Vikassheel Insaan Party (VIP). A Rajya Sabha seat in Bihar fell vacant after the demise of former Union Minister Ram Vilas Paswan. Paswan's term as a member of the Upper House from Bihar was to otherwise end in April, 2024. He died on October 8.

According to the Election Commission, the bypoll to the Rajya Sabha seat vacated following the death Paswan will be held on December 14. Counting of votes will take place on the evening of December 14 itself as per laid-down norms. Paswan had won the Rajya Sabha bypoll held last year. The seat was offered to the Lok Janshakti Party (LJP) leader by his NDA ally BJP.

The seat was vacated after Union minister and BJP leader Ravi Shankar Prasad won in the 2019 Lok Sabha election and moved to the Lower House. Paswan was the sole LJP member in Rajya Sabha.

(The above story first appeared on LatestLY on Nov 27, 2020 08:33 PM IST. For more news and updates on politics, world, sports, entertainment and lifestyle, log on to our website latestly.com).